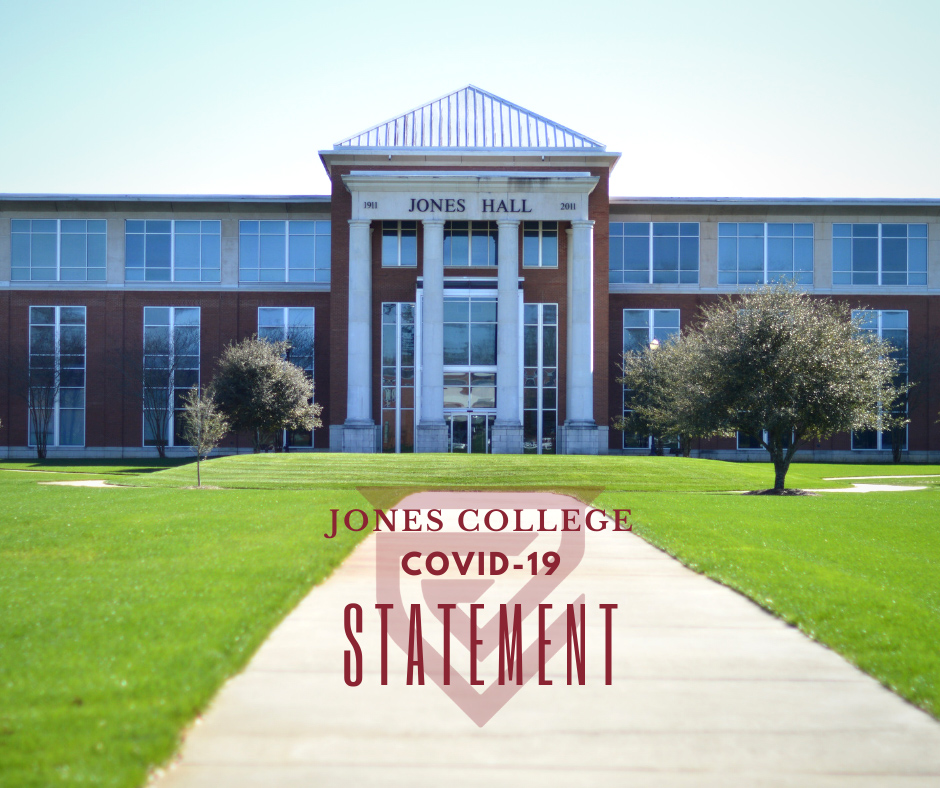 ELLISVILLE –In response to the rapidly evolving situation with COVID-19 and to maximize social distancing to slow the transmission, all classes at Jones College and the Jones College County Centers (Advanced Technology Center, Clarke, Greene, Jasper, and Wayne) are canceled for March 23- 27, 2020, the week that students were scheduled to return from Spring Break. Beginning Monday, March 30, 2020, and until further notice, the college will hold all classes and related coursework online.

The timeframe for this approach is open-ended; however, the administration will monitor this, “Learn from Home” approach continuously with the hope of returning to normal operations before the end of the spring semester. Students taking academic programs will receive direction from the instructors regarding specific details for the transition to online learning.

Students taking Career and Technical Education (CTE) programs will continue in a modified format. CTE students will be contacted by the program’s lead instructor on class specifics moving forward. Students preparing to “Learn from Home,” should check their college issued email daily for instructor directions, available support resources and the college’s operational updates. Jones Collee students should also review their access to technology resources, specifically internet and computer access. A follow-up email will be sent later this week with technical support for the student community.

Faculty, staff and other employees are expected to work during this period but practice social distancing. All instructional employees are to continue moving all the course content to an online, “Learn-from-Home” format during the week of March 23-27, 2020.

Essential college personnel will continue to work on campus according to college safety protocols. Employees will be notified by their direct supervisor by Friday, Monday 20, 2020, for instructions concerning the week of March 23-27, 2020.

Effective immediately, all college-sponsored events will be canceled or postponed until further notice. Please look for announcements from event coordinators and contact them if you have questions. We encourage administrative gatherings and large meetings to be conducted by tele/web conference and keep “in-person” meetings to an absolute minimum. We will explore options to enable certain events to be held “virtually.”  Campus notifications can be found at https://www.jcjc.edu/collegeupdate/.

ELLISVILLE – Jones College students were dismissed for Spring Break on Thursday afternoon, one day early.  Administrators and the Emergency Management Team are monitoring developments concerning the spread of the COVID-19 (Novel Corona Virus 2019). The institution is following the guidelines of the Centers for Disease Control and Prevention for Institutions of Higher Education.

Information and updates will be disseminated on the college website at https://www.jcjc.edu/ and through campus email, the campus emergency notification system and media outlets. 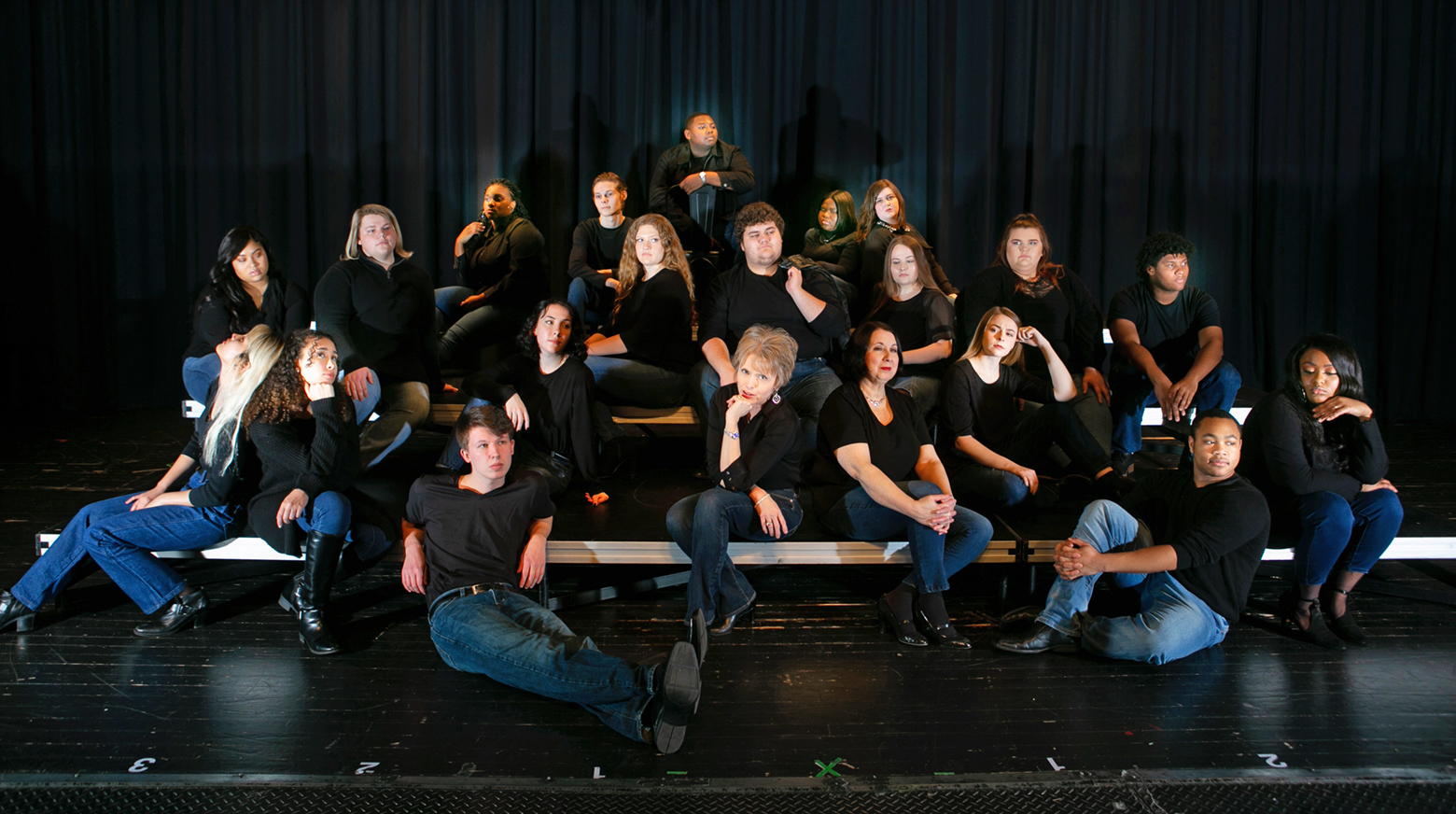 ELLISVILLE – Jones College’s JC Voices will present their annual spring concert, A Silence Haunts Me, on March 31, at First-Trinity Presbyterian Church in Laurel. The public is invited to the free, 7 p.m. concert which will commemorate the 250th anniversary of Ludwig van Beethoven’s birth.

“Beethoven was not best known for his vocal or choral works; nonetheless, this year’s concert will feature a variety of vocal selections by, or about Beethoven.  The audience will hear some familiar tunes, as well as some lesser-known gems such as three of the 25 Irish Songs (WoO 152), for solo, duet, and piano trio.  It is always exciting to find repertoire that is not often performed, but by a very well-known composer and although most people think they know the works of Beethoven, they most likely do not know the folksongs,” said JC Voices Director, Dr. Susan A. Smith.

Interestingly, Beethoven composed more folksong settings than he did any other genre, completing 179 folk arrangements from 1809 to 1820, added Smith.  Jones College students performing the Folksongs include Erin Biglane of Ellisville, Laurel residents, Alyssa Garick and Hayden Dillistone, Janna Swanner of Taylorsville and Bonner Welch of Moselle.

In addition to honoring Beethoven’s genius through his own music, the concert will also feature works by J. S. Bach, György Orbán, Stephen Paulus, Kim André Arnesen and others, as the singers explore the power of the human spirit through silence, loss, forgiveness, and hope.  The pinnacle of the concert will feature the passionate and dramatic work by Jake Runestad, A Silence Haunts Me, which is a complex and intense choral work describing Beethoven’s famous text, The Heiligenstadt Testament.

“This famous letter, addressed to his brothers, detailed the suffering and despair felt by Beethoven as his impending deafness became increasingly more profound.  Jake Runestad and poet Todd Boss recreated, through music, the famous text outlining Beethoven’s loss of hearing and the emotions that accompanied that loss—despair, hopelessness, retribution, devastation, frustration, and finally, acceptance,” said Smith.

The Chamber Singers are conducted by Dr. Susan A. Smith and accompanied and assisted by collaborative pianist, Dr. Theresa Sanchez.  This year’s program will also feature guest string players and clarinetists Michelle Graham, Jones College Clarinet Instructor and the Northeast Jones High School assistant band director, Lindsey Langley. Reagan Dukes of Laurel and Lydia Dees of Ellisville will perform as soprano soloists and singers from the select vocal group, The Bridge, will join JC Voices as they present choral gems and new works from the Baroque period to the Twenty-First Century.  Composer Joseph Martin’s piece, The Awakening, concludes the concert with reflections of sadness, hope, celebration and remembrance.

Martin tragically lost his middle school choral teacher and his musical inspiration to a very violent death after a choral concert.  This piece is written in honor of her and is composed in three sections, as described by Martin—the first a dream, or rather nightmare, where there is silence and despair, the second, a new day of hope and the end of silence, and the finale, a hymn of praise to the “Giver of Song.”  Beethoven found the strength to live and compose, even after his almost complete deafness.  He composed the Missa Solemnis, the Ninth Symphony, the last five string quartets, and the last five piano sonatas during this time. His legacy is profound and the final sentiment of The Awakening, Let Music Live, embodies no more exceptional genius than Ludwig van Beethoven.  Happy Birthday Beethoven (1770-1827)!

For more information about how to support JC Voices or to be notified of our upcoming concerts and events, contact Dr. Susan A. Smith at susan.smith@jcjc.edu or contact the Fine Arts Division at 601-477-4203. 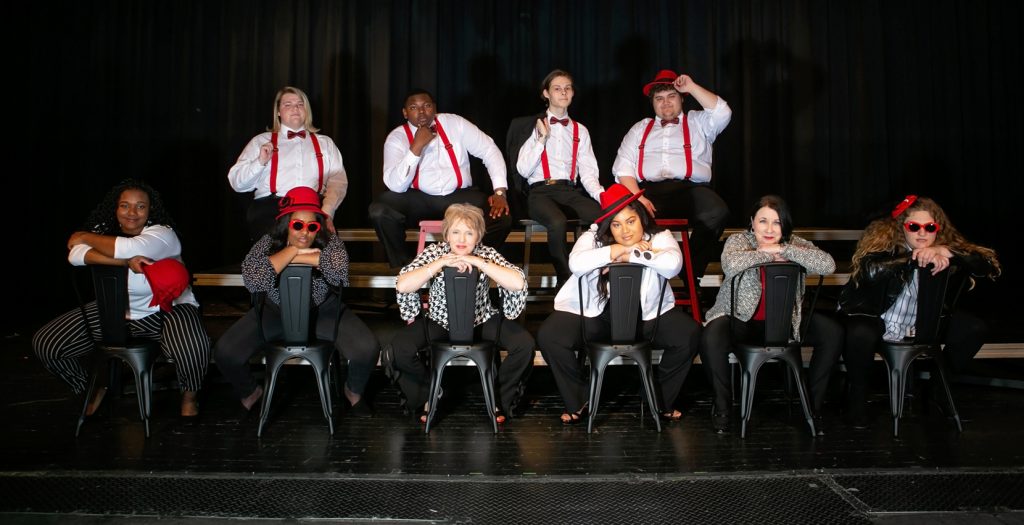 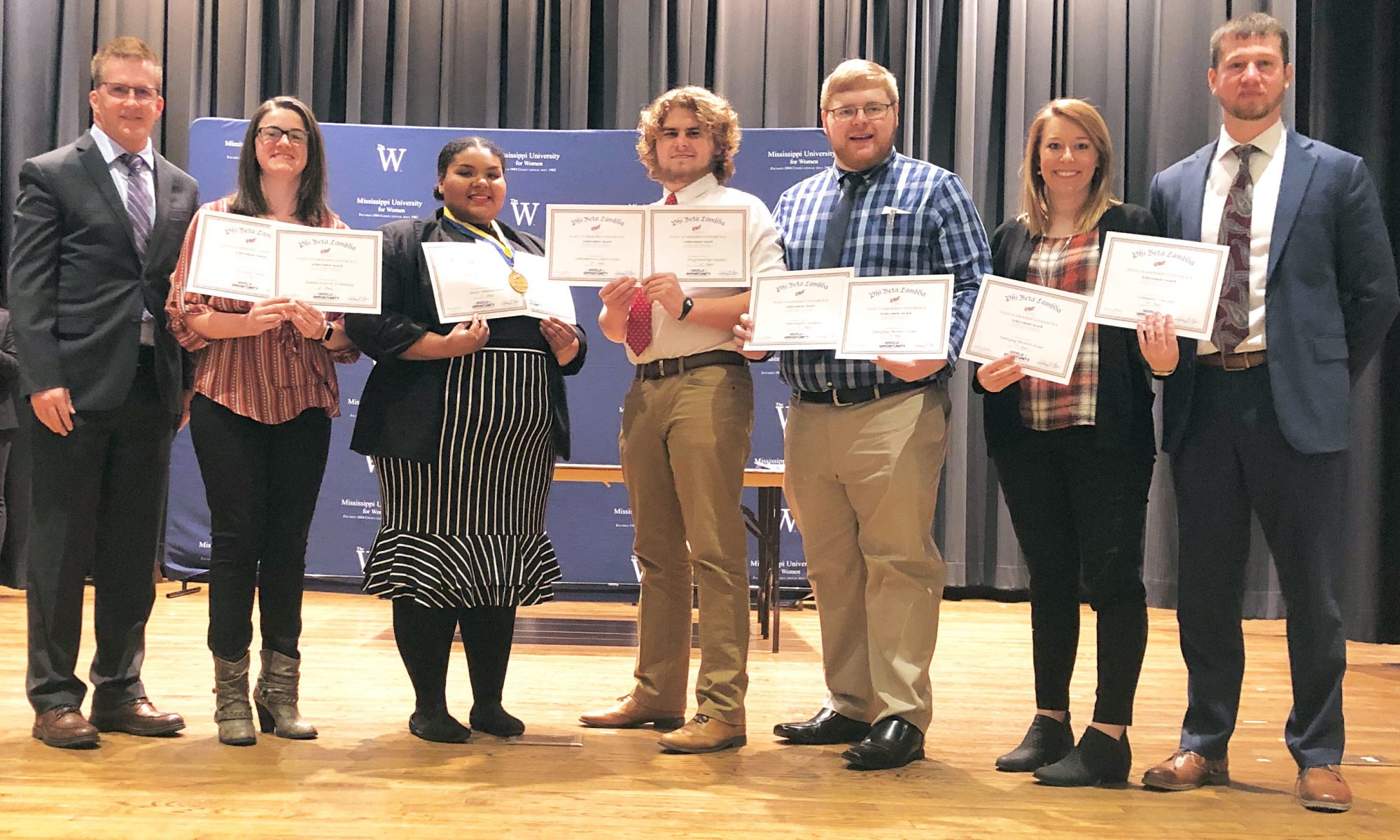 ELLISVILLE- All nine of the Jones College students that competed in the Phi Beta Lambda business club’s State competition in Columbus, Mississippi, came home as winners.  These students placed first, second, or third in their competitive events which qualified them for national competition in June, in Salt Lake City, Utah. During the three-day conference, each student competed in two business-related events. The events ranged from accounting principles and entrepreneurship concepts to computer programming and network design.

“Five of the students will be going to the four-day national conference and competition in Salt Lake City,” said Jones College’s PBL Advisor, David Ray.  “This group is smaller than we normally take to nationals, but each of these five students has a lot of potential to place nationally.” 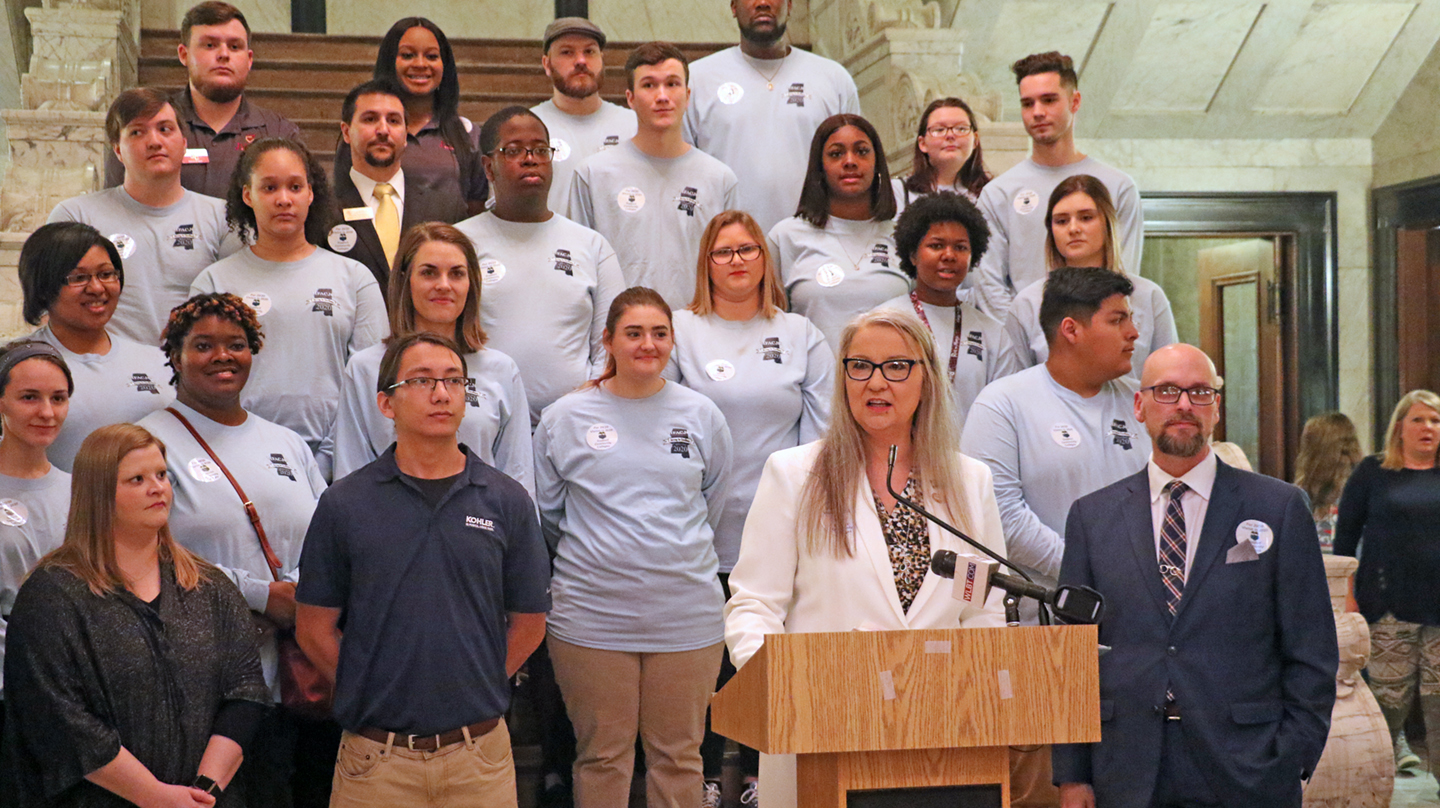 JACKSON – Several supporters of state community and junior colleges spoke at Capitol Day March 4, at the state capitol in Jackson to share why the two-year colleges should be funded fairly.

Mississippi Faculty Association for Community and Junior Colleges President Marilyn Ford said that for more than 10 years now, she’s been participating in Capitol Day to ask for additional funding for community colleges.

“While many personnel and teaching paradigms have changed too many unfortunate aspects such as funding have not changed,” Ford said. “Many of us teach overloads, despite the fact that we’ve already spent hours in the classroom teaching, advising, guiding over 100 students in addition to the committee obligations, sponsorships with clubs and organizations, not because we have so much time on our hands, but because we love what we do, despite quite frankly, we haven’t had state-supported raises in a number of years.” 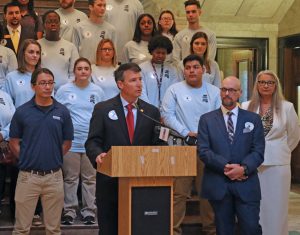 Mississippi Association of Community and Junior Colleges representative and Holmes Community College President Dr. Jim Haffey explained that there’s been an emphasis this session and last session on a teacher pay raise for community colleges, but that there hasn’t been a significant one for the past 11 years. He pointed out that community college instructors are required to have the same master’s degrees and credentials as university professors.

“Based on this, most reasonable people would make the argument that community college instructors should make at least the average between a K-12 teacher and a university professor,” said Haffey. “However, Mississippi has not made that a priority. I urge our legislators to make it a priority and begin addressing the $9000 gap per instructor that exists between our community college instructors’ salaries and the mid-point salary in education.” 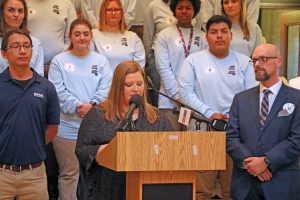 Sharpe, who grew up in a small farming community in rural Kemper County, attended a high school with a graduating class of 30 people. She chose to attend East Mississippi Community College to help provide a smooth transition between high school and university. Now a physician, Sharpe said attending EMCC was instrumental in developing skills she needed later in life, such as working with people from diverse backgrounds. She also created friendships with her instructors which continue to today. 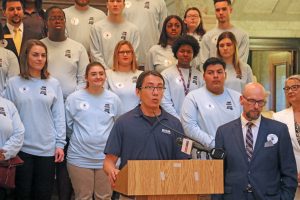 Evans was given an internship opportunity while a student at PRCC that turned into his current job. Working for Kohler, he has zero college debt. He said his college instructors took him out of his comfort zone and empowered him with the tools and knowledge he needed to succeed. He said he believes that “community college is the number one way for young men and women to climb out of poverty in the state of Mississippi.”

The group shared statistics which reveal the importance of community colleges to the state and economy. Haffey said college graduates with an associate degree will earn $537,000 more over a 40-year career than those without associate degrees. In addition to the nearly 100,000 community college students in the state, an additional 100,000 attend workforce college classes.

“In recent years, community colleges were cut 11 percent,” said Haffey. “We were forced to close programs that were not cost-effective to operate with limited state funding. When we close these programs, Mississippians lose an opportunity to better their lives. Those cuts still have not been restored as of today.” 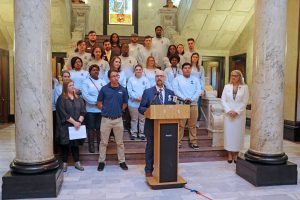 Collum said he knows students who came to PRCC to obtain their GED, then completed PRCC and went on to Harvard or Columbia University. He said for some students, the community college is their only option for higher education.

“There is no greater conduit out of poverty, out of generational poverty, than education and there is no one who gives greater access to education than community colleges with their open-door policy,” Collum said.

Collum said he believes there are still opportunities to help additional potential students by providing more options at the community college level.