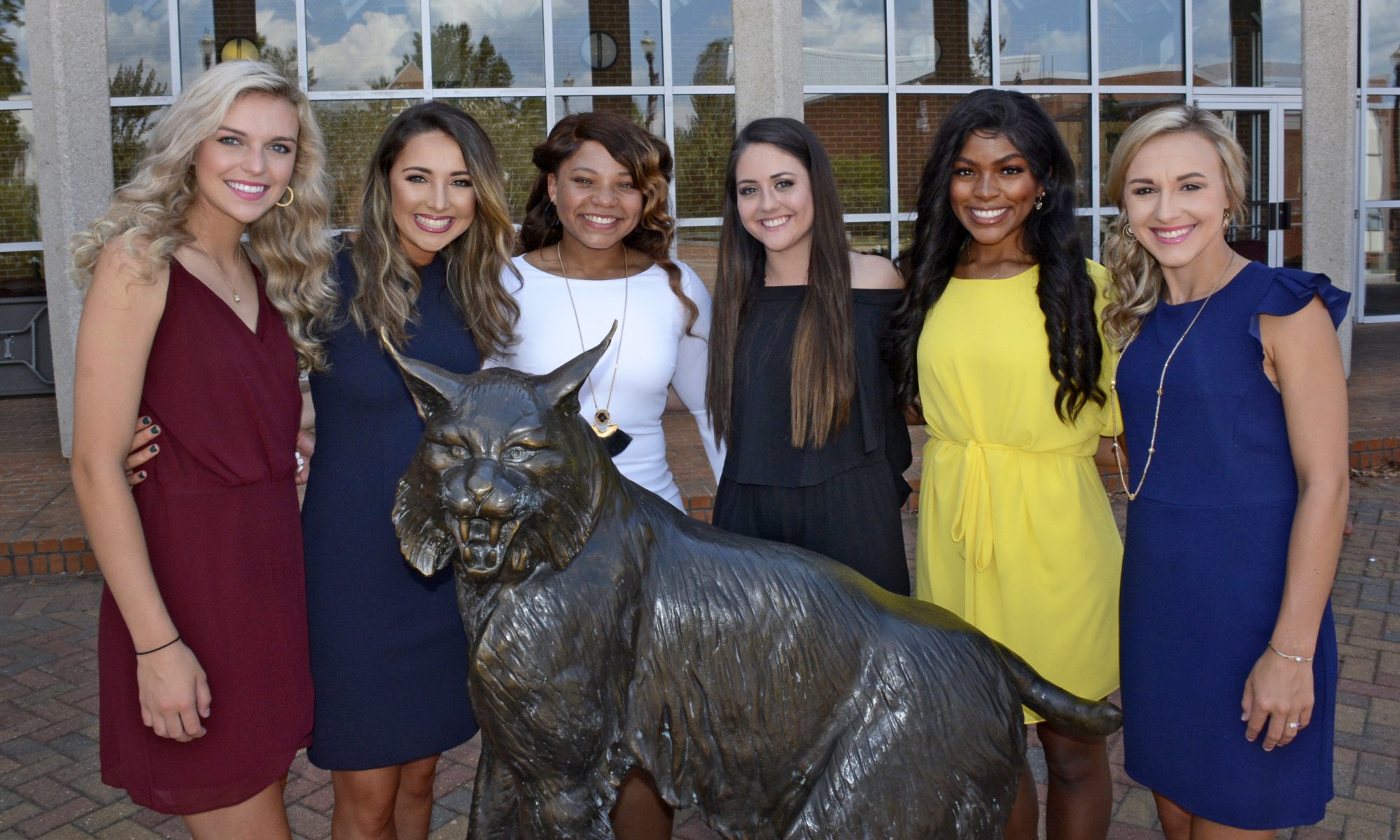 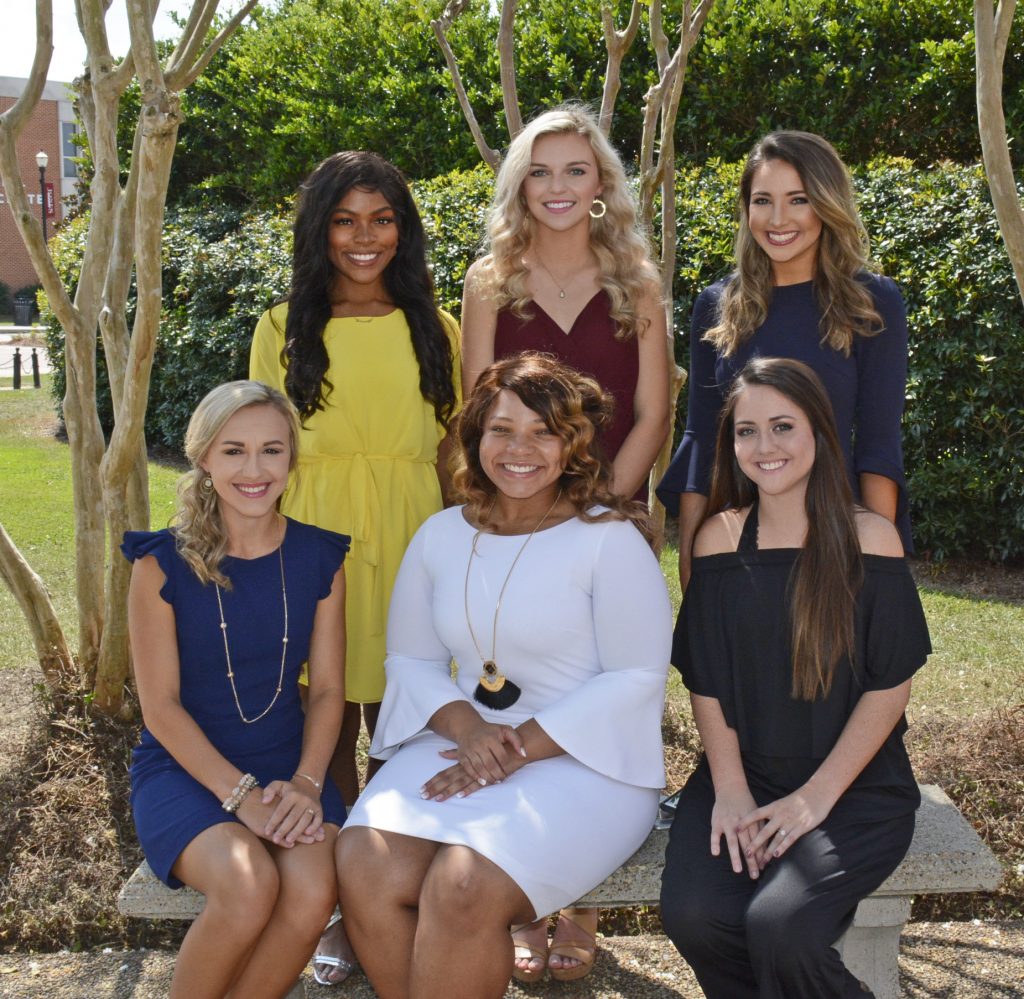 ELLISVILLE–Homecoming on the campus of Jones College in Ellisville is set for Saturday, October 5, with the theme, “Bobcat Revolution.”  Earlier this month, JC students elected its 2019 Homecoming Court with the following ladies representing them during Homecoming festivities.

Queen, Jazmin King of Bay Springs is majoring in biology with a pre-med emphasis, with aspirations of becoming an endocrinologist.  The Jones College sophomore is a member of the Bobcat Brigade, a student recruiting organization, Phi Theta Kappa international honor society, the English Honor Society, the Presidential Task Force, the Charles Pickering Honors Institute and the Student Government Association where she serves as Secretary. The Bay Springs High School graduate participated in basketball and track where she was a four-time state qualifier in discus and shot-put. King also cheered for the Bay Springs Bulldogs and earned All-American Cheerleader honors all four years, as well as Cheer Captain her senior year in high school. As President of her class and a 2017 Rural Medical Scholar, King graduated the top of her class with highest honors and she was named Star Student. Her peers voted her to be Miss Bay Springs High School, Most Intellectual and Most Likely to Succeed. After completing her studies at Jones, King plans to attend Mississippi State University and major in English with a minor in Spanish before going to medical school. Mike and Carressia King are her parents.

Escorting King will be W.C. Washington of State Line. The accounting and business administration major is a member of the business organization, Phi Beta Lambda and he participates in intramural sports and he has been a member of the Engineering Club. The Wayne County graduate intends to further his education at the University of Southern Mississippi. Washington’s parents are W.C. and Tammie Washington.

Abby McNeil is your Student Body Maid. The Bay Springs resident is majoring in kinesiology. She is a member of the Student Government Association and the student athletic fan club, “Bleacher Creatures.” She is also an athletic trainer for the football team and the women’s basketball team. At Stringer High School, McNeil graduated in the Top-10 of her class with highest honors and she was a member of the Hall of Fame and a Mississippi Scholar. McNeil’s aspirations include pursuing a career as an athletic trainer after earning her bachelor’s degree in kinesiology at USM. Her parents are Chris and Stacey McNeil.

Escorting McNeil is her younger brother, Tate McNeil.  The Stringer High School graduate is a freshman at Jones, majoring in civil engineering. In high school, Tate graduated in the Top-10 of his class with highest honors, as well as being honored as a Mississippi Scholar. At JC, he is a member of the “Bleacher Creatures,” intramural flag football, and he was voted as a Freshman Class Favorite. His future plans include graduating from Jones and earning his bachelor’s degree in civil engineering from Mississippi State University. His parents are Chris and Stacey McNeil

Ashley Allen is your Sophomore Maid. The Puckett resident is majoring in kinesiology. She is a member of the Fellowship of Christian Athletes, Student Government Association and Phi Theta Kappa honor society. At Puckett High School, Allen was a member of the softball and track teams and she was a member of FCA. She also graduated in the Top-10 of her class. Allen’s aspirations include being a physical therapist after earning her bachelor’s and master’s degrees in kinesiology. Her parents are Annette and Billy Allen.

Escorting Allen is Otoniel Duran.  He is originally from La Vega, Dominican Republic but he is currently living in Hattiesburg.  The polymer science and engineering major is a graduate of Presbyterian Christian High School where he graduated with a 4.0 GPA. He also played basketball for the PCS Bobcats and he was voted, Most Likely to Brighten Your Day and Prom King.  At Jones College, Duran is the Student Government Association President, a member of PTK, the Engineering Club, and the Baptist Student Union. He also plays intramural sports and is on the practice squad for the women’s basketball team. Future plans for Duran include earning a bachelor’s and doctoral degree in polymer science at USM. His parents are Antonio Duran and Rosalba Hernandez.

Sophomore Maid, Hallie Meadows lives in Piave and is studying to be an athletic trainer. While at Greene County High School, she played softball and was a cheerleader, earning Hall of Fame honors and graduating in the Top-10 of her class. She was also voted as Miss Greene County High School. At Jones, Meadows is a member of the Concert Choir, and she is a member of the Student Government Association. After graduating from Jones, Meadows will attend USM to earn her bachelor’s degree in athletic training. Chris and Micah Meadows are Hallie’s parents.

Meadow’s escort is Leakesville resident, Brent Dearman who is an electrical technology major. The Greene County High School graduate was active in SkillsUSA, placing 3rd in the state in welding. Additionally, Dearman took 2nd place in a forestry competition hosted by FFA in high school. The sophomore is already getting experience in his career choice working with Universal Services in Leakesville, on the Greene County Center expansion project. After graduating next May, He plans to begin a career in the oilfield as an electrical technician. Bryan and Kim Dearman are his parents.

Freshman Maid, Caidyn Crowder of Ellisville is majoring in biochemistry.  At South Jones High School, Crowder was involved in the South Jones show choir, “Company,” the Drama Department, Smart Club, and the volleyball team.  She was elected as President of the Senior High Beta Club, South Jones High School’s 2018 Most Beautiful, Student Body Maid and “Most Talented.” The Mississippi Scholar represented Jones County in the 2019 Distinguished Young Women state competition. At Jones College, Crowder is a member of the Concert Choir, Jones OnStage and SGA. Her future plans include attending Mississippi State to earn a bachelor’s degree in biochemistry and business and then apply for the physician assistant program. She also hopes to continue singing. Caidyn’s parents are Grant and Anita Shawn Crowder.

Escorting Crowder is Peyton Griffin a music major from Ellisville. The South Jones High School graduate was active in Showchoir, Drama, Beta Club, First Priority and FCA. Griffin was voted as Most Talented and was a Senior Class Favorite. The Mississippi Scholar graduated with Honors and is a member of the Hall of Fame. At Jones, he is a member of the Concert Choir, Jones OnStage and SGA. Griffin’s future plans include earning a degree in music education to be a choir director after pursuing a career performing. Brad and Keri Griffin are his parents.

Dariyel Johnson is your Freshman Maid from Leakesville. She is majoring in marketing and musical theater. The Greene County High School graduate was active in cheer, soccer, volleyball, marching band, Theatre Club, WILDPAT, Hall of Fame member, and Beta Club where she served as the 2018-19 Senior Beta Club State Vice President. Johnson was voted as Miss Greene County High School and she represented her hometown in the Miss Hospitality competition. At Jones, she was elected as Freshman Class President and she is a member of the Bobcat Brigade recruiting organization, SGA, and Concert Choir. At the University of Mississippi, Johnson will be majoring in the integrated marketing program. Her parents are Darryl and Latrina Johnson.

Johnson’s escort is her twin brother, Da’Rell Johnson.   The Greene County High School graduate was on the varsity basketball team, Beta Club and WILDPAT. The 2019 Hall of Fame member plans to transfer to the University of Mississippi after graduating from Jones.  Darryl and Latrina Johnson are his parents.