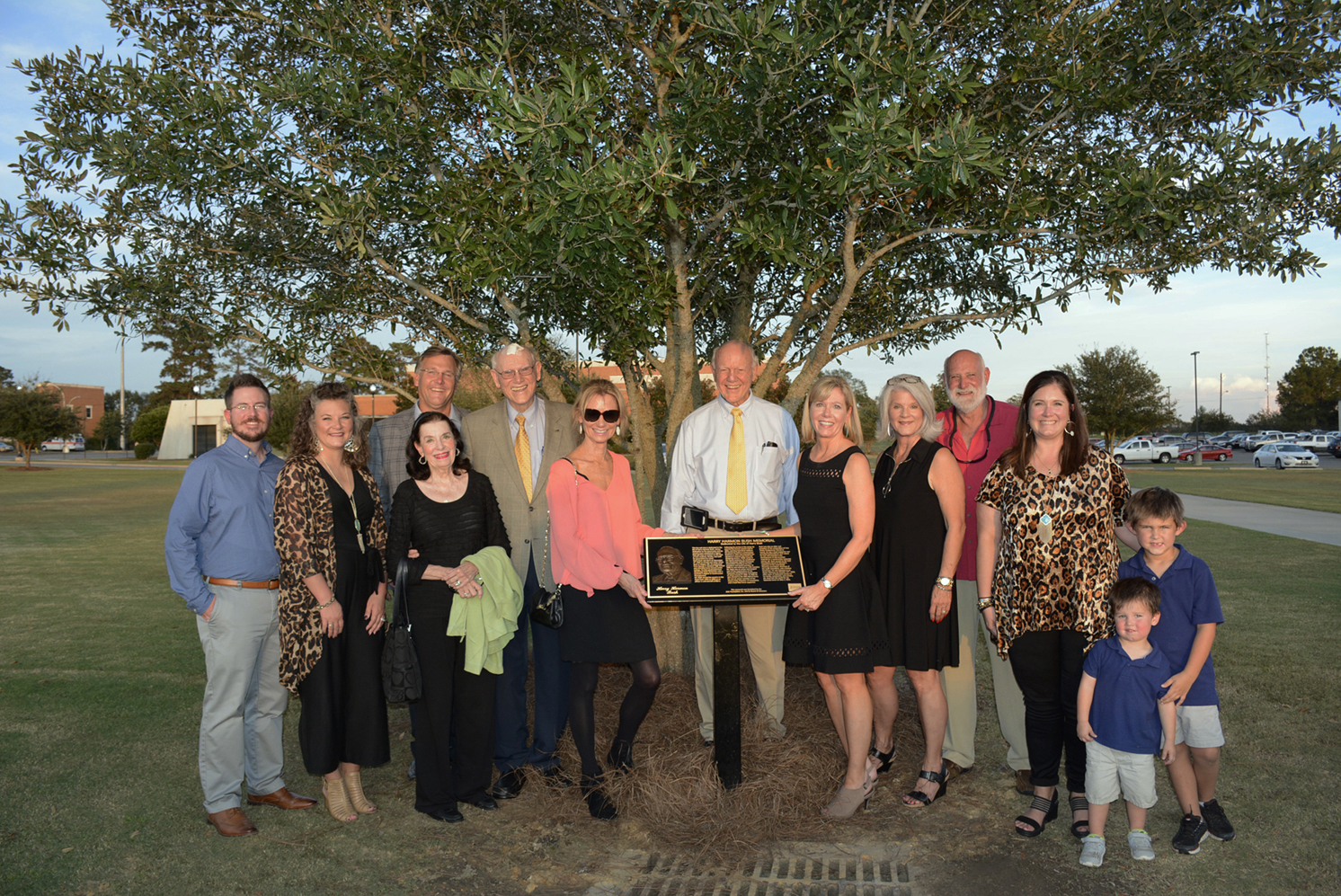 ELLISVILLE – Four community legends and founders of Jones College, Harry Bush of Laurel, Julius “Judy” King of Heidelberg, Judge Charles W. Pickering of Hebron and Vic West of Wayne County and Laurel were recently selected to be honored during a Legacy Tree dedication ceremony. Located in the heart of campus, a live oak tree and bronze plaque with a summary about each person will serve as a lasting legacy for each individual. Jones College President, Dr. Jesse Smith explained recognizing these men with a live oak tree, which can live a millennial or two, is very appropriate.

“We thought it only fitting to put these ‘Legacy Trees’ in this ring of honor (in front of Jones Hall) to recognize graduates and people involved with the college; those who built the foundation of the college and everything that has been accomplished and for the foundation for the future.  These people were selected for their service,” said Dr. Smith. “It is a testament to the men who came from humble backgrounds, who took their education and made something significant in their communities and made the world a better place.”

In memory, a Legacy Tree was dedicated to Harry Bush who was born in Magee and passed away in 2014. He graduated from Gardiner High School and attended Jones County Junior College before graduating from Mississippi State University with a bachelor’s degree in construction management. He served his country in the Army from 1954 to 1956 and shortly after leaving the Army, Bush married Jeanne Cain and they had three children.

He joined his father’s construction business in 1962 and expanded the company’s interests. While actively working in the family business, he established the Mississippi Asphalt Pavement Association and served as president and board member before he was inducted as a Life member in 1996.

At Jones, Bush provided leadership for JCJC as a Foundation Board of Directors, chairman of the Long Range Planning Committee, chairman of the Audit Committee and a “tireless” fundraiser. Utilizing his business experience and education, Bush assisted in the establishment of the construction materials course and provided materials for the course.

The 2006 JCJC Honor Alumnus was also active in the community, playing an integral part in the organization of the Economic Development Association of Jones County in 1982. Ten years later, he would be elected to the EDA Hall of Fame.

At the Legacy Tree dedication, Bush’s daughter, Linda Bush Burdine said JCJC has always been a part of her life and she especially appreciates this unique memorial for her father.

“We are deeply grateful for this honor. We thank you for the effort you’ve taken to honor dad and the other honorees,” said Burdine. “(Harry) knew that education is truly the key to success and he knew an educated workforce was the key to a vibrant and healthy economy; that’s what he wanted for Jones County and why he loved Jones County Junior College so much.” 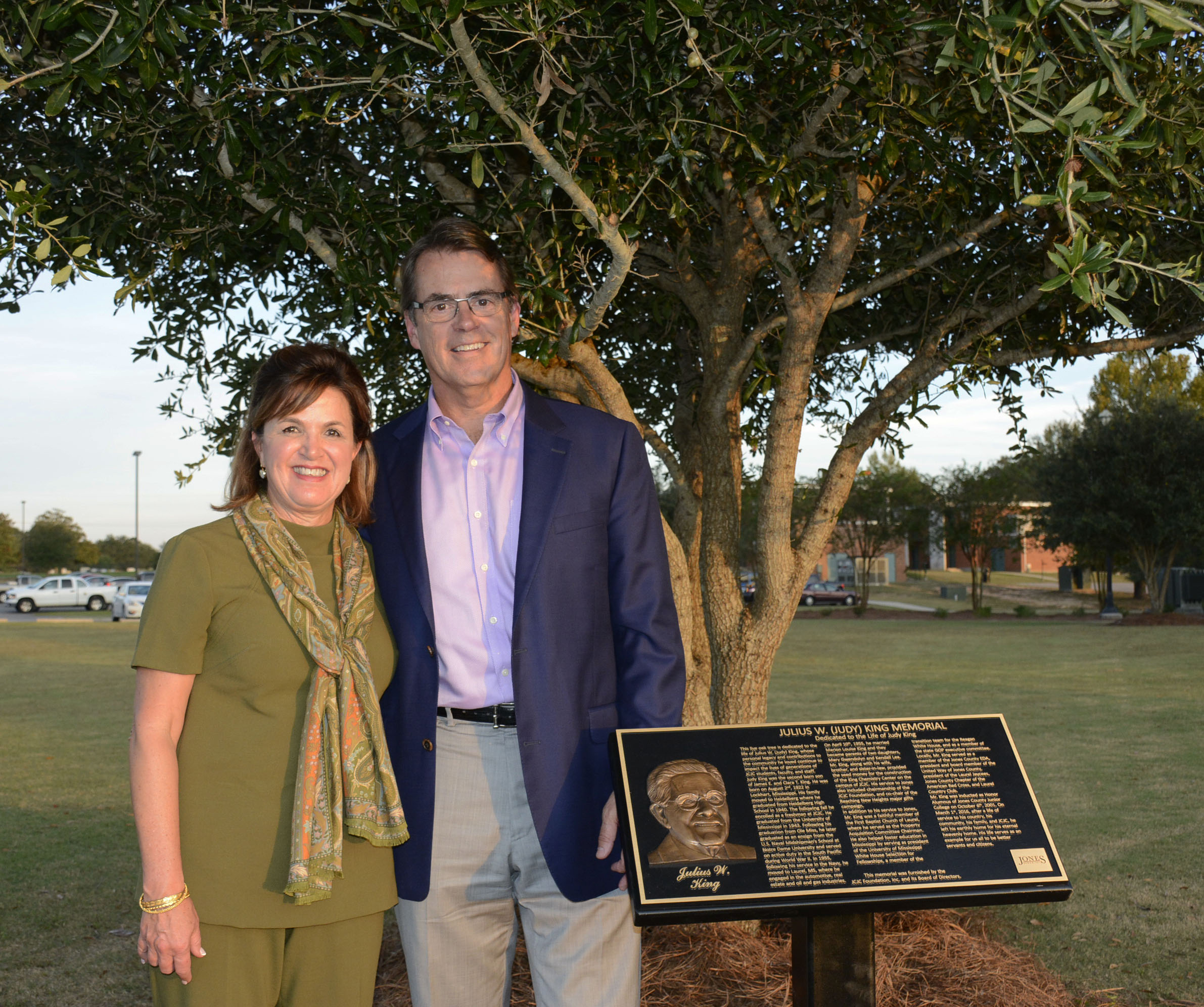 In 2016, “Judy” King’s earthly life of serving his country, community, JCJC and his family came to an end.  A man of humble living in the Jasper County town of Heidelberg, he graduated from high school in 1940 and JCJC two years later.  Following his graduation from the University of Mississippi in 1943, he graduated as an ensign from the U.S. Naval Midshipman’s School at Notre Dame University and served in the South Pacific during World War II. In 1955, he returned to Laurel where he worked in the automotive, real estate, and oil and gas industries.  Soon after, he married Marion Louise King and they had two daughters.

King is credited with fostering education in Mississippi by serving as president of the University of Mississippi White House Selection for Fellowships. He was also a member of the transition team for the Reagan White House and a member of the state GOP executive committee. As a faithful member of the First Baptist Church of Laurel, King served as the Property Acquisition Committee Chairman.

Among his contributions to Jones, Judy chaired the JCJC Foundation Board and co-chaired the Reaching New Heights major gifts campaign. He was selected as the Honor Alumnus of JCJC in 2001. Also, the King family provided seed money for the construction of the King Chemistry Center on campus.

King served the community as the Jones County EDA president, a board member of the United Way of Jones County, President of the Laurel Jaycees, Jones County’s American Red Cross and the Laurel Country Club. His daughter, Kendall Waggoner said she is grateful the college has chosen to memorialize her father.

“He loved JC and he was so proud of the time he spent here,” said Waggoner. “He was proud of Jones County and being a Mississippian, and so thankful to be a part of the Foundation here. He was so excited about all that was accomplished. Thank you so much for honoring him in such a special way.” 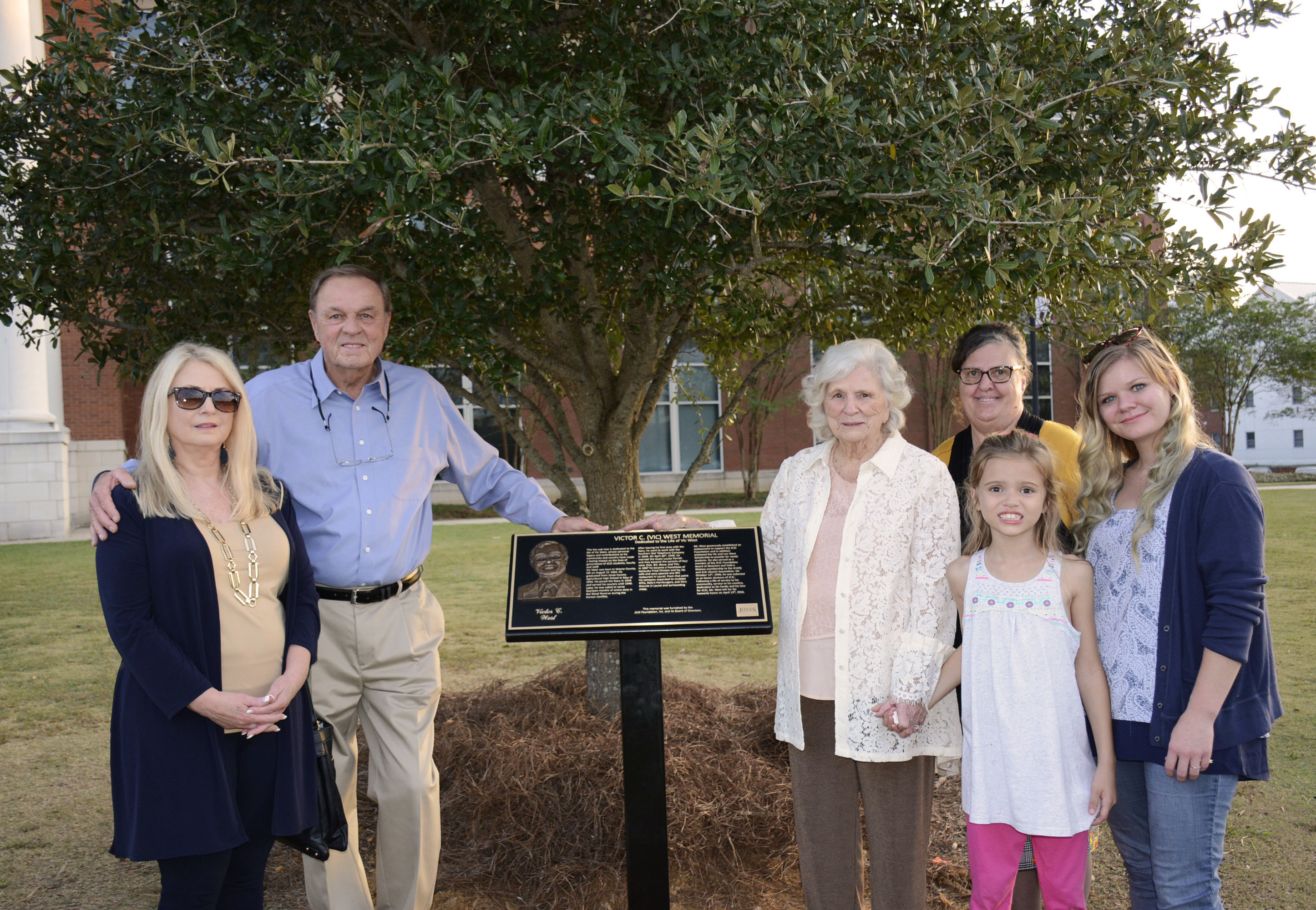 Laurel entrepreneur, Vic West graduated from Jones County Agricultural High School in May of 1942. He served his country in the Navy from 1943 until 1946. He was later called to serve fourteen months of active duty in the Naval Reserve during the Korean Conflict.

In 1946, Vic married his wife, Louise Parrish and they became parents of four sons. He went to work with Southern Bell Telephone Company after serving in the Navy.  In 1967, he became a franchisee of Kentucky Fried Chicken. Additionally, he and his wife and sons opened one KFC restaurant in Laurel and eventually expanded to open multiple KFC restaurants along with Rally’s Hamburgers in the region and Vic’s Biscuits in Laurel.

The West’s established an endowment to support the JCJC Foundation and in addition, endowed the Vic and Lou West Scholarship to provide for needy students.  He also served as a member of the JCJC Foundation Board of Directors and held lifetime memberships to the JCAHS and the JCJC Alumni Associations. In 1996, Vic West was selected as an Honor Alumnus of JCJC.  Twenty years after that honor, West passed away.

“When you think of all of the honorees, you think of the ‘Greatest Generation.’ They served in World War II, came back to their homes and impacted their communities, like my father,” said Bill West. 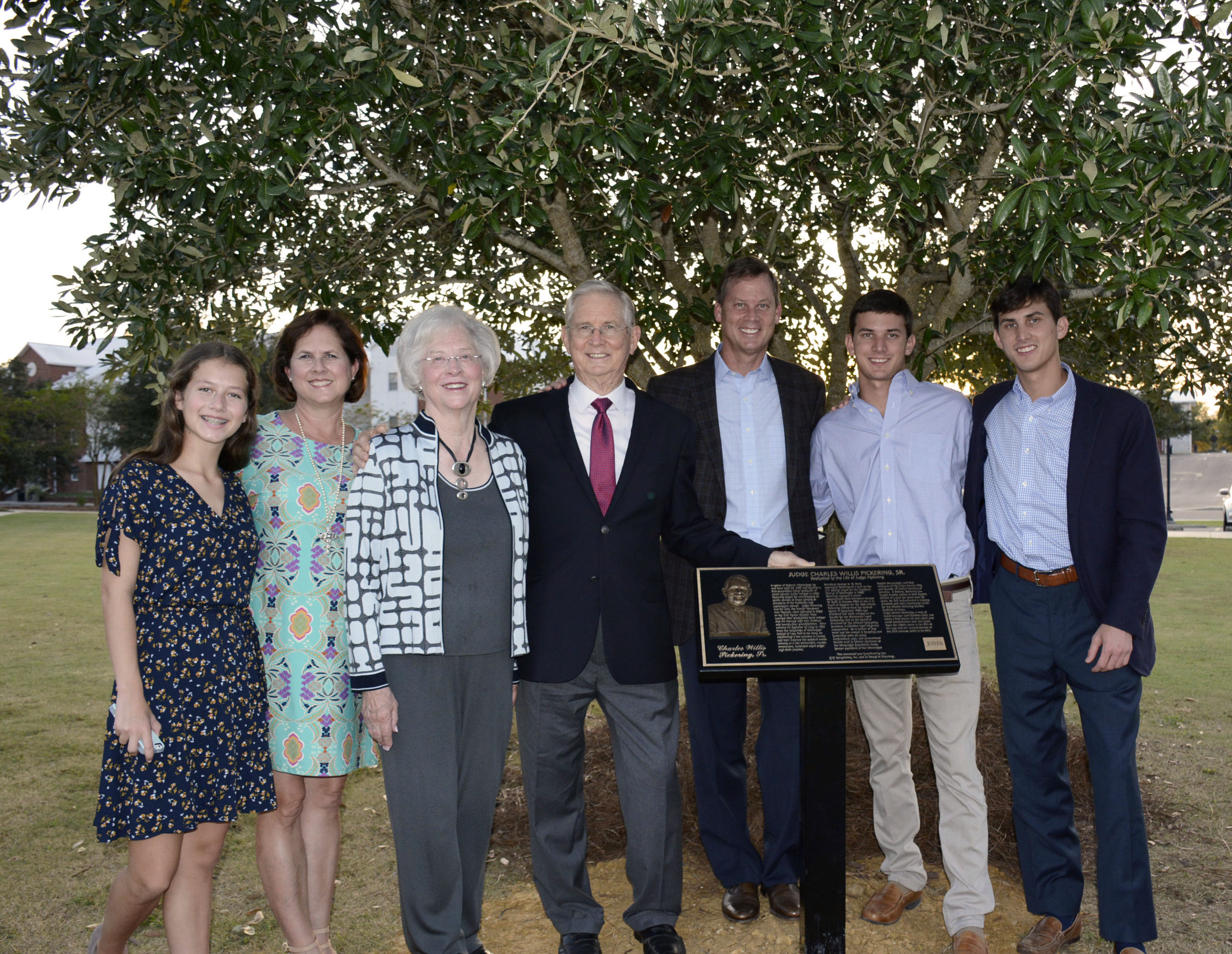 While Judge, Charles Pickering may not have served in the military, he battled in other ways. After earning his Bachelor of Laws in 1961 from the University of Mississippi School of Law as first in his class, he established a law practice in Laurel. The 1957 JCJC graduate and president of both the freshmen and sophomore classes, entered into Jones County politics. He served locally as city prosecutor, county prosecutor, municipal court judge and state senator before President George H.W. Bush appointed Pickering to a seat on the U.S. District Court for the Southern District of Mississippi in 1990. Pickering received a recess appointment from President George W. Bush in January 2004 to the U.S. Court of Appeals for the Fifth Circuit, retiring at the end of the year.

Meanwhile, he practiced law for the Blackstone Legal Fellowship and was on the board of directors for the Alliance Defending Freedom, a Christian legal advocacy organization. Pickering also published books about the politics of judicial confirmation and the judiciary in jeopardy.

JCJC has honored Charles and his wife, Margaret as Honored Alumni in 2000. Several years ago, the judge was instrumental in establishing and raising scholarship funds for the Charles Pickering Honors Institute at Jones. The eighty-one-year-old also has the distinguished honor of being the first generation honor graduate at Jones County Junior College in 1957.

“I am deeply honored and humbled by this recognition, first because I have such great respect for the other three being recognized…. But I am more honored because of Jones County Junior College. JCJC has been a part of both our lives; my wife’s parents were both part of the college administration when we were students here. I drove the bus for two years while in school and that $35 a month paid for my first two years of higher education. It was an economical education and it was also a good education….Also, by staying here, I had an opportunity to convince Margaret I was a better choice than the other boyfriend!” Judge Pickering explained. 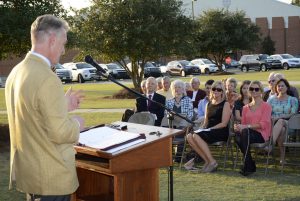 shared all of the honoree’s names are embedded in the fabric of the college and the country. However, Judge Pickering also influenced him personally.

“This graduate has been an oak tree for our community for quite a long time. Judge Charles Pickering Sr., this is a dedication not only to you, our community, state, and our country but also for me personally, because of the influence you’ve had on my life and our family. This is what Jones College is all about and we thank you for your legacy.”

The first Legacy Tree was dedicated in memory to Ellisville’s Dick Anderson in 2016, after decades of leading and serving his family and his community.  For more information about the Legacy Trees, contact the Alumni and Foundation Office at 601-477-4049. 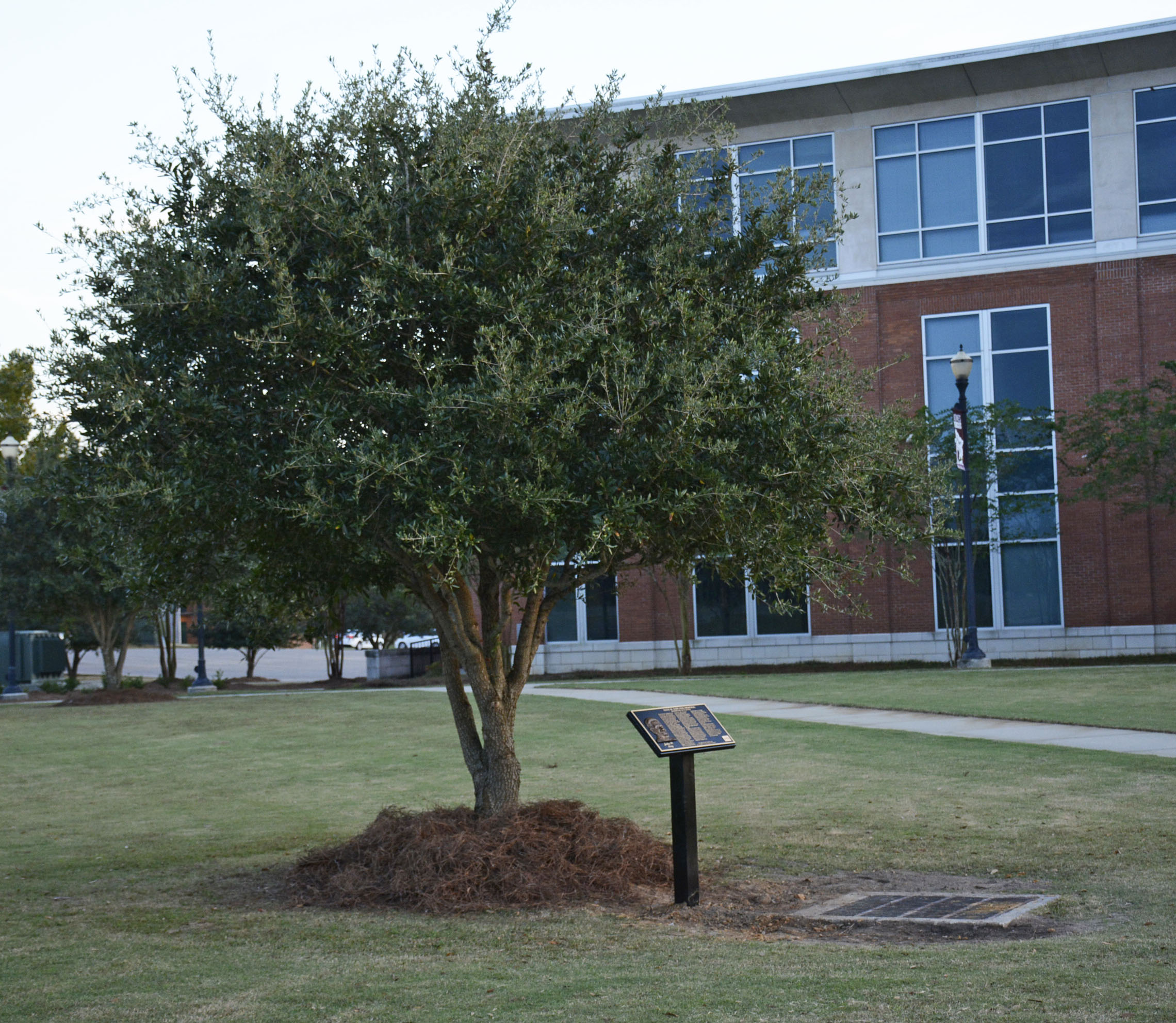