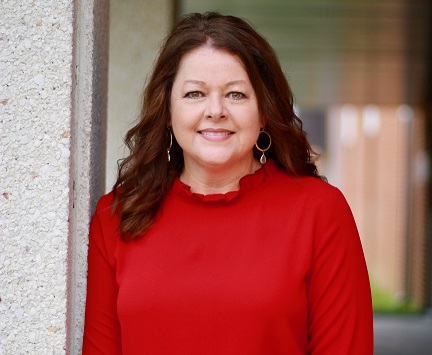 Vicki Hampton, Family Nurse Practitioner, serves Jones College through her professional role as a South Central Regional Medical Center Family Nurse Practitioner and has been the Director of the Jones College Clinic since 2011. A 1990 JC graduate, Ellisville native and current Petal resident, Hampton also serves the college as the JC COVID-19 Task Force Medical Advisor. Since March of 2020 she has been responsible for enacting and overseeing procedures to help limit the spread of the COVID-19 virus on the Jones campus.

While a student at JCJC, Hampton was a member of the Touch of Gold Dance team, A Capella Choir and Concert Choir, and was selected as a 1988 Freshman Homecoming Maid and 1989 Homecoming Queen. Several months later, the South Jones High School graduate earned the title of Ellisville’s Miss Hospitality. After graduation from Jones, Hampton pursued her bachelor’s degree in exercise physiology from the University of Southern Mississippi and worked at Wayne General Hospital. Hampton began her working relationship at South Central Regional Medical Center in the Critical Care Unit while earning her B.S.N. She earned her master’s degree in nursing from the University of Mississippi Medical Center and began working at the Community Medical Center in Lucedale. She returned to SCRMC to work at the Ellisville Medical Park, the Laurel Family Clinic and the Ellisville Pediatric Clinic before returning to her alma mater. In addition to her busy work schedule, Hampton juggles her duties as a wife to her husband of 27 years, Sandy and their four children, Anna Catherine, Emma, Avery and Will. Additionally, Hampton is an active member of Carterville Baptist Church and serves on the Petal High School Ministry Team.