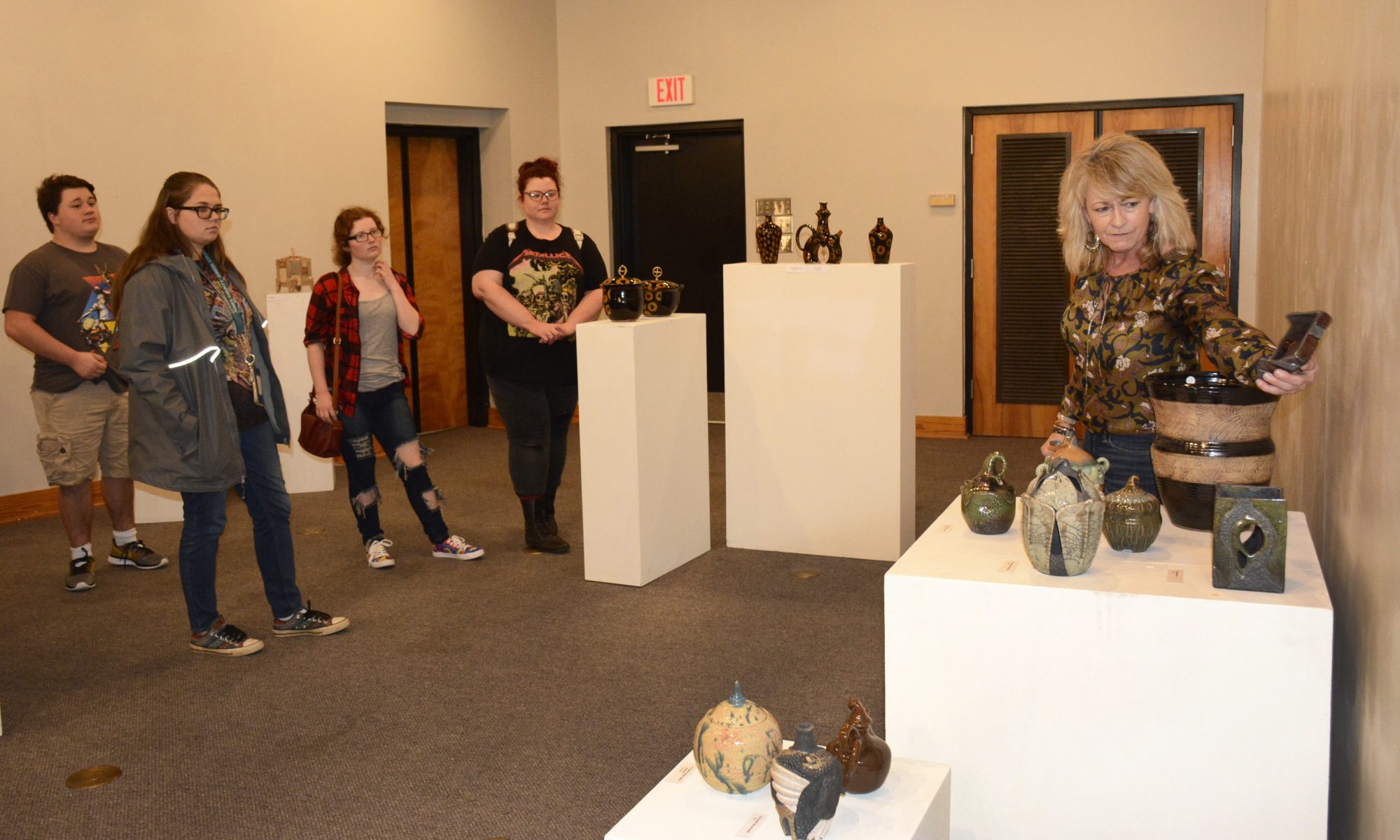 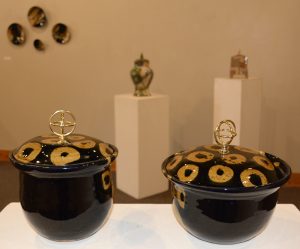 afternoon with aspiring Jones College artists sharing her secrets to creating. For the most part, Smith said she doesn’t have a plan when she begins creating. In fact, many of her pieces on display at the Jones College Eula Bass Lewis Art Gallery this month, are a result of teaching her students at Co-Lin Community College over the last 32 years. 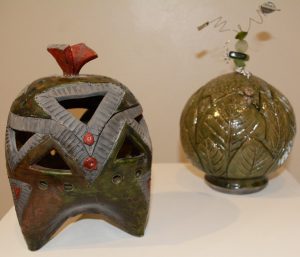 experimental,” said Smith. “I was teaching the slab method to students and I began to work along with them, exploring the simplicity of the box. I would usually only half construct a box as an example and throw mine in the slip bucket, but these were saved, and I enjoyed the process and found such satisfaction in their completion.” 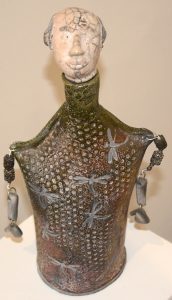 As a potter, Smith said she loves to touch everything. Working with clay as a tactile artist gives her creative freedom to “lose” herself. Playing around with textures and experimenting with shapes is important but more importantly, Smith said she likes her art to have some functionality. Most of her work has lids for example, which can be used as a keepsake box or a canister.

“I like playing with handles and lids, concentrating on smaller pieces and textures to make something functionally creative,” said Smith.

Teapots are another favorite creation for Smith because they have personality. 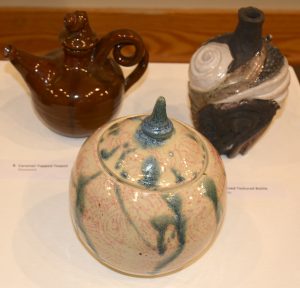 “I don’t make fragile stuff. I love to touch everything,” Smith explained. “I fire up things so slow and hold it there for hours to make sure all the moisture is out of it so it doesn’t break.” 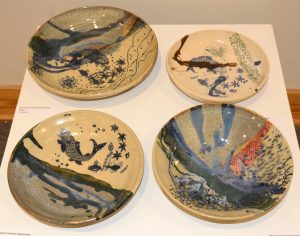 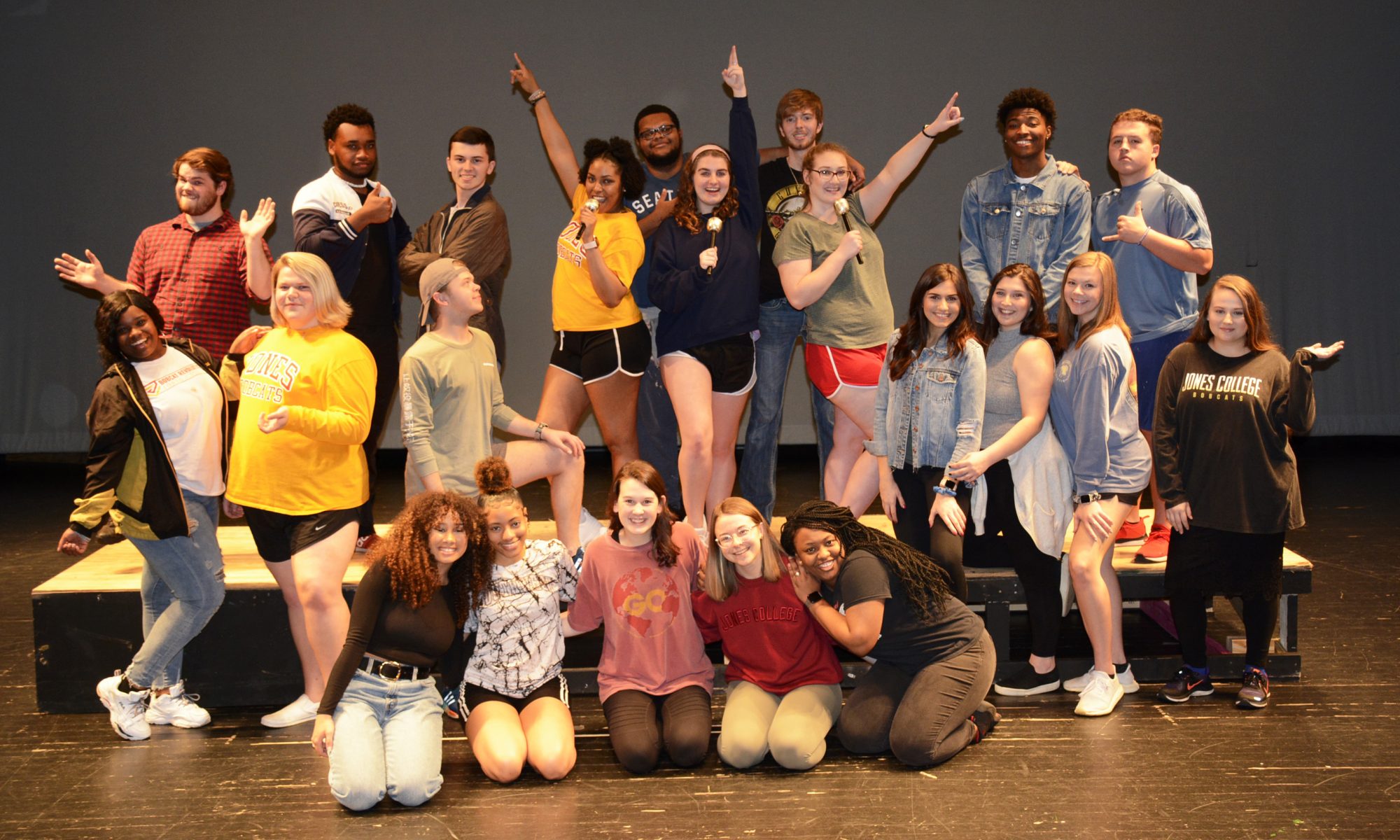 ELLISVILLE- Jones College’s theater production of “Mamma Mia!” will have you singing the ABBA tunes of the ‘70s and ‘80s while enjoying the Greek Islands during three performances on the Ellisville campus. The musical opens 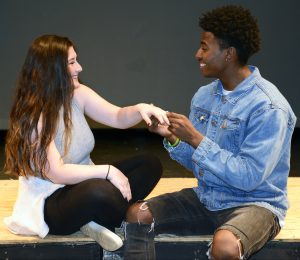 with Sophie, played by Olivia Pippin of Laurel, sending out wedding invitations. Sophie’s mother Donna, played by Lauren Hankins of Laurel, was the lead in a pop group, “The Dynamos” in her younger years. She raised Sophie at the Inn she manages on a secluded Greek Island. JC theater instructor and musical producer and director, Dr. Jennifer Bruton said as the wedding guests arrive, the chaos begins, and the family mystery unravels.

“‘Mamma Mia!’ is widely known for its popular music, originally written and performed by ABBA. Many of the songs are familiar and have entertained audiences of all ages. It’s hard to resist the urge to get up out of your seat when you hear ‘Take a Chance on Me,’ or ‘Dancing Queen!’” said Dr. Bruton. “The musical is one of the Top 10 longest-running shows on Broadway and the West End, it has toured around the world, and it was made into an extremely popular movie. The show features a large cast, great singing and energetic choreography.”

The 22-member cast of Jones College students will have three performances open to the public on Friday & Saturday, March 27 & 28, at 7 p.m. and on Sunday, March 29, at 2:30 p.m. in the M. P. Bush Fine Arts Auditorium on the JC campus in Ellisville. Tickets are $5 for children 17 and under and $10 for adults with free admission for JC students and faculty with a valid ID. Tickets can be purchased at the door. The movie version was rated PG13, however parents should use their discretion for children younger than middle school. For more information, please contact Jennifer Bruton at 601-477-2675 or email her at, jennifer.bruton@jcjc.edu.

Playing her “dream” role as Sophie, is a newcomer to the JC theater, Olivia Pippin. However, the JC sophomore has been involved in numerous Northeast Jones High School productions, including Grace in “Annie Jr.” and Gertie in “Larceny and Old Lace.”

“One of the most challenging things about playing Sophie is unlocking a vulnerable facet of myself that I typically don’t interact with. Sophie is an incredibly complex character who combines the utmost femininity and emotional capacity with lighthearted vivacity, courage and bravery. It is a welcome challenge that brings out the best in me.”

Sophie’s mother Donna, played by Lauren Hankins, is also no stranger to the stage. She played Velma von Tussle in JC’s musical production of Hairspray last spring and has performed in more than 50 productions around Jones County. The Northeast Jones High School graduate played Fiona in “Shrek: The Musical” and Pinky Tuscadero in “Happy Days.” Hankins said her character is also a dream role she wanted to portray and is thrilled to be acting alongside her best friend and daughter in the play.

“Donna literally can embody a teenager in an older woman’s body. It’s hilarious to see her go from serious to super easy going with her girlfriends.  She can be so overly dramatic and it’s so much fun to portray,” said Hankins. “Donna’s songs are definitely the hardest part about playing her. So much emotion, so much power and so many lyrics!”

One of the three men in Donna’s life that is creating some of the drama is Harry Bright, played by sophomore, Lane Smith of Columbia. In JC’s “Hairspray” last spring, Smith enjoyed the role of playing the father to the star of the show. This spring, he plays one of the three men who could be Sophie’s father.

“Harry is very different than most of the other roles I’ve played in the past. He is very much like me because he is very quirky, dependable and a really nice guy,” said Smith. “The most challenging thing about playing Harry is his British accent. I have a huge Southern accent and it has been difficult for me to keep the voice for the entire performance. Each night, I get better.” 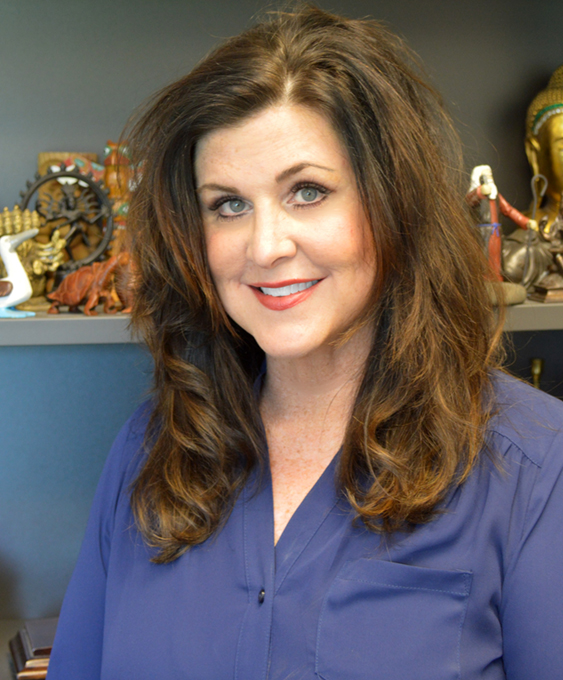 ELLISVILLE –Jones College’s psychology instructor, Stephanie Green has been selected as the Jones College 2019-2020 Mississippi Humanities Teacher of the Year.  She will be honored by the Mississippi Humanities Council and the college on Tuesday, March 10, 2020, at 10:30 a.m. in the M.P. Bush Fine Arts Auditorium.  The public is invited to see Green’s presentation, “Happiness Without Prozac,” which will discuss the keys to happiness.

“Everyone wants the keys to happiness. We read self-help books, attend counseling and take medications trying to find the secret to a happy life.  This presentation will examine the factors involved in happiness and discuss the similarities of the happiest people in the world,” said Green.

The Laurel resident has been teaching Psychology and Human Growth & Development classes at Jones for 22 years. Previously, she worked in Nashville, Tennessee as a mental health therapist for four years working with teenagers in a psychiatric setting. However, Green said she loves teaching more than anything else. Her Social Science Division Chair, Dr. Ronald Bishop said her students benefit greatly from her wisdom and love for her profession.

“Stephanie Green is a phenomenal and beloved teacher. She truly has students at heart, and that shows in how students respond to her.  She is a friend to all, especially dogs.  She is conscientious and devoted to making the world a better place through education. She is a natural choice for Humanities Teacher of the Year, and the award is much deserved,” said Bishop.

“I am extremely grateful and honored to receive this award. I remember being a Jones student and learning so much in my psychology classes. It is humbling to now be recognized as a teacher at the school I loved as an 18-year-old. I still feel that same pride and can’t believe I get to do this as a job. I love this school and the people I work with. They are not just colleagues but truly some of my best friends,” said Green.

Other honors Green has received include being recognized in 2019 as one of five JC faculty members nominated for the Faculty of the Year Award. In 2015, she was honored as the Social Science Teacher of the Year and in 2011, she was selected as a Jones College “Lamplighter.”

The 1989 Jones graduate earned her bachelor’s degree in Social Rehabilitation Services and her Master of Science Degree in Counseling Psychology from USM where she graduated with Honors. She is also a National Board-Certified Counselor.  Additionally, Green did extra graduate coursework in psychology at William Carey University in 2001 and at Delta State University in 2012.

She serves the Laurel community as a board member for the Laurel Animal Rescue League and is the Fundraising/Event Coordinator for the Dixie Golf Association. At Jones, Green is a Philosophy Club Co-Sponsor, an advisor for the freshman life skills course, Psychology of Personal Adjustment and she is a member of the Academic Probation Committee. She has served as the Sophomore Breakfast Committee and as a Class Homecoming Float Sponsor. 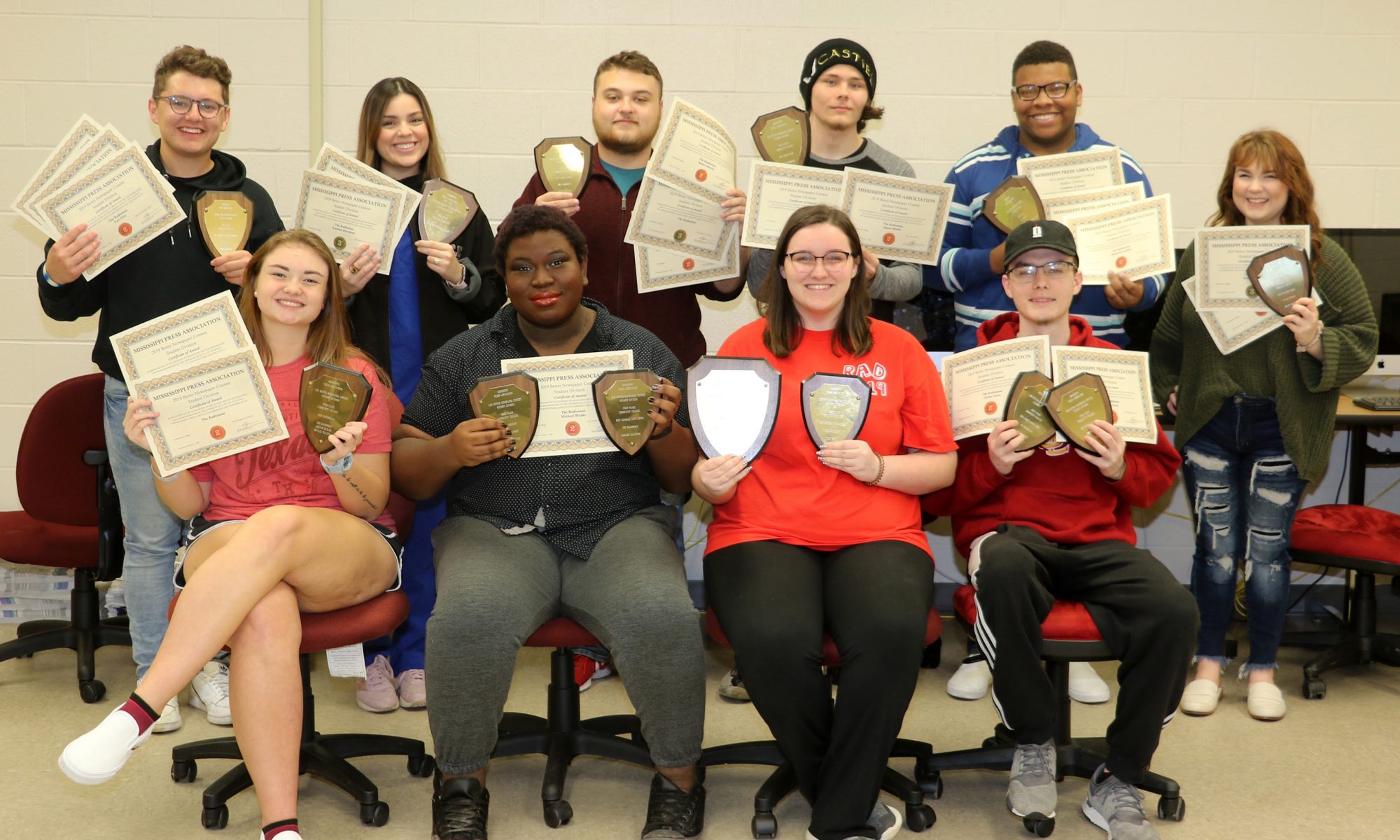 ELLISVILLE – Jones College’s newspaper staff won the General Excellence award, as well as a total of 31 awards at the annual Student Better Newspaper Contest, held with the O.C. McDavid Journalism Summit at the Hilton Jackson Feb. 7. This is the 12th consecutive year the Radionian student newspaper has earned the top award in the state.

The newspaper is taking applications for next fall. Students interested in joining should contact advisor Kelly Atwood at Kelly.atwood@jcjc.edu. 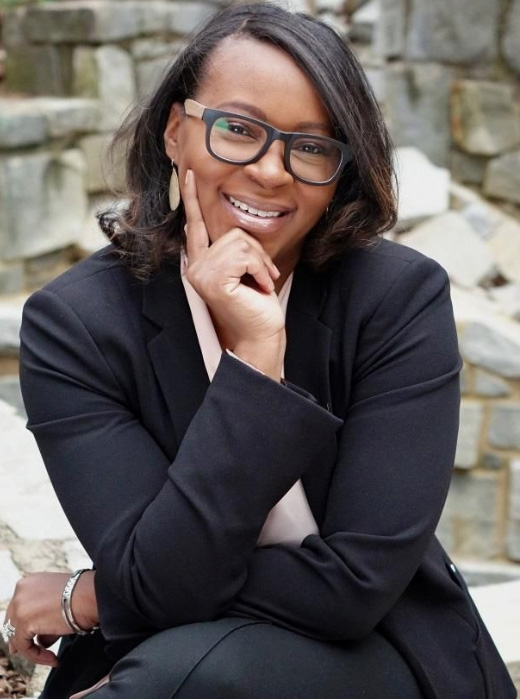 ELLISVILLE – Jones College’s Office of Student Affairs will be hosting its annual Black History Leadership Program on Thursday, February 27, at 10:15 a.m. until 11:15 a.m. in the Home & Health Auditorium on the Ellisville campus. The public is invited to attend this free event to hear a performance by members of the JC Concert Choir directed by Dr. Joel Dunlap and the keynote speaker, Dr. Angel Brutus, who serves as the Director of Counseling and Sport Psychology and is a member of Mississippi State University’s Sports Medicine and Performance team.  She will speak on the event theme, “Transform for a Purpose.”

“I believe Dr. Brutus has the experience and expertise to help our campus community ‘Transform for a Purpose’ as we all strive to become the best version of ourselves,” said event coordinator & Jones College’s Assistant to the President for Leadership Training, Dr. Samuel Jones. “I believe Black History is all about learning from the past, envisioning a better future and implementing those triggering insights in the present as we live our lives as students and employees at Jones College.  In order to make the world a better place, it’s important to start with ourselves.”

Dr. Brutus provides clinical and performance enhancement services to address MSU’s sports culture. Her training includes Licensed Professional Counseling, Certified Rehabilitation Counseling and Sport-Performance Psychology. She serves as co-chair for the Association for Applied Sport Psychology’s (AASP) Nominations Leadership and Development Committee, Former Co-coordinator for the Association’s Race & Ethnicity in Sports Special Interest Group (SIG) – member of additional SIGs (Women in Sport, Eating Disorders in Sport, Adaptive Sport & Physical Activity) and she is an active member of other committees within the Association (Ethics and Community Outreach). Dr. Brutus recently secured designation as a Certified Mental Performance Consultant (CMPC®) as recognized by AASP. She is also a member of the American Counseling Association as well as the American Psychological Association, where she currently serves as junior program chair for Division 47 and secretary for Section 2 – Performance Psychology.

In her spare time, she enjoys spending quality time with her three daughters, husband and mother, engage as a community volunteer with philanthropic organizations targeting at-risk youth and mentoring students interested in pursuing careers in the helping profession.