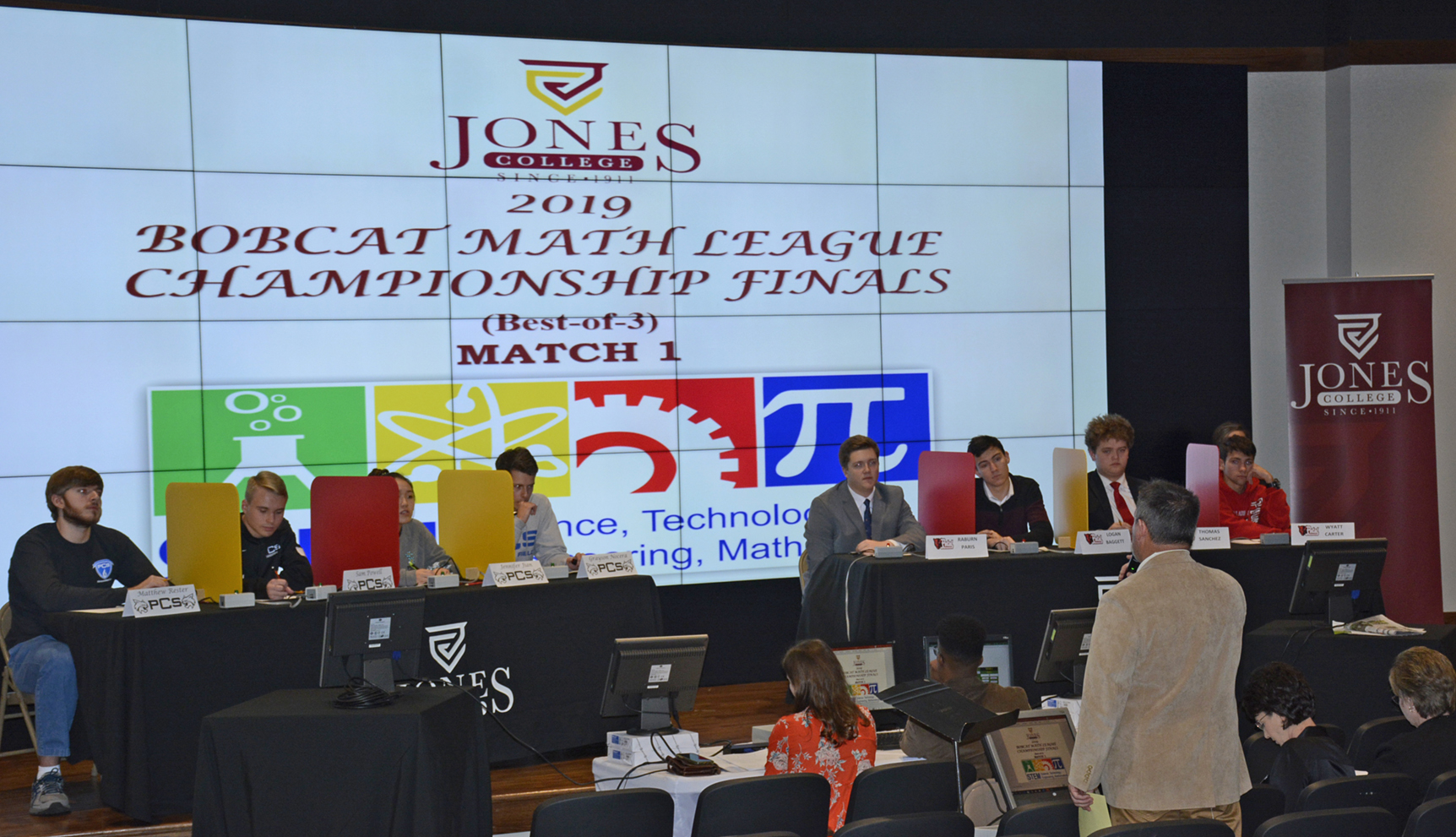 ELLISVILLE – After five weeks of securing the first-place ranking going into the Jones College Bobcat Math League Championship Finals, Presbyterian Christian High School’s team managed to fend off newcomers to the competition and the second-seeded team, Petal High School to become the 2019 Jones College Bobcat Math League Champions. Besides a trophy, coach’s plaque and player medallions, the coach was awarded a $1,350 cash prize. The team members will split $1,500 and the high school will receive $250 for the victory. 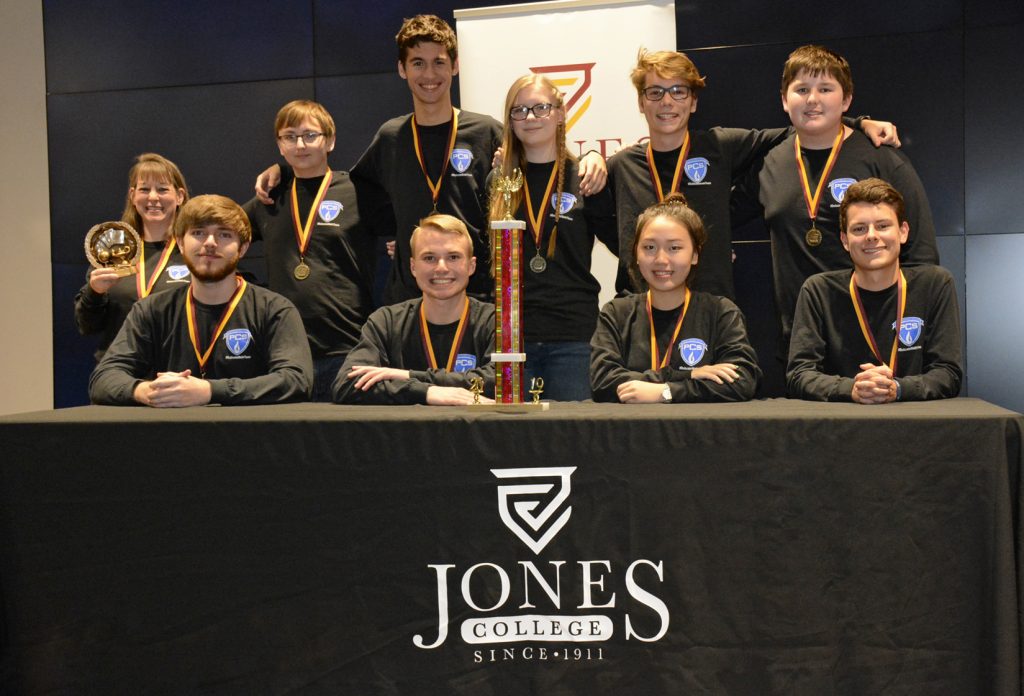 “I have great students!” said Presbyterian Christian High School Coach, Melissa Brown. “They do all the work. I just help them get here to the competition.”

In fact, Brown’s teams from PCS hold the record for the most championship wins, and runner-up finishes in the Bobcat Math League’s history with three championships in 2019, 2014 and 2013, and two, second-place finishes in 2018 and 2012.

“Last year was tough because both teams knew the answer and Oak Grove just beat us to the buzzer. I think most of the credit goes to the students for their work ethic and their desire to learn new things, but credit also goes to the great math and science teachers we have here at PCS,” said Brown.

Every year, new teams join the League and some dropout. This year, the Petal Panthers proved they were contenders despite their lack of experience in the League.

“It was so fun as a coach to watch these students excel in this competition. Many of them do not get a platform to showcase their academic abilities and for them to have an opportunity to do so is really amazing,” said Petal High School Co-Coach, Melissa Bonner. 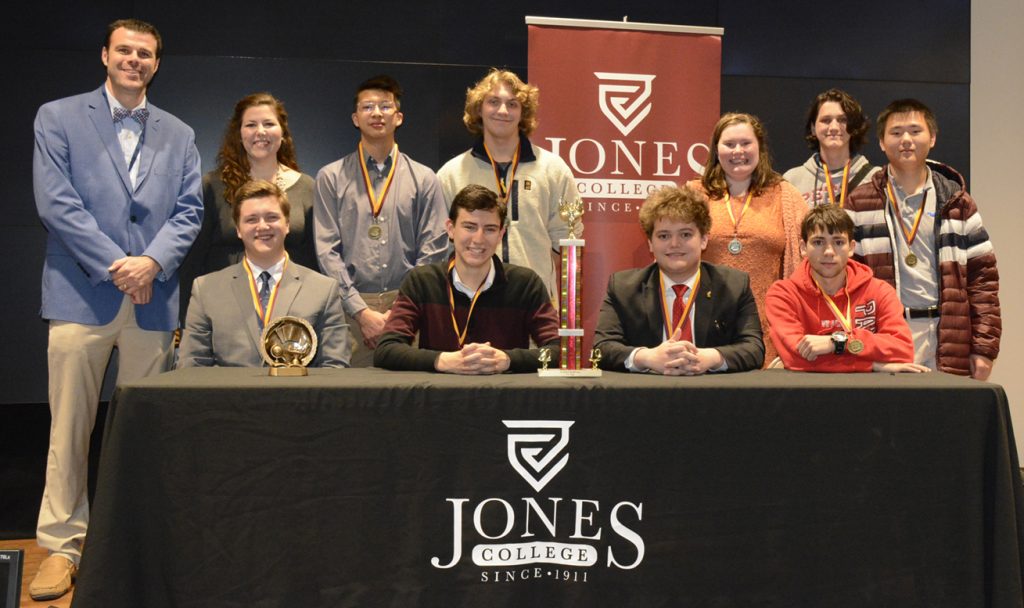 “This event is one of the very few where I actually get to use my math abilities competitively.  STEM is essentially foundational now because of the new developments we see in the world and for a group to support that and strive for excellence in the field is a great thing in my book.  As for almost winning the whole thing on our first competition year, well, it was pretty cool! said Sanchez.

Both Petal and Presbyterian Christian were both powerhouses during the regular season, as the only undefeated teams, division leaders and the highest cumulative season points with 339 and 354, respectively. However, the PCS Bobcats may have the advantage in the final rounds of the Championship Finals with experience on their side.

“This year we had the dream team,” said PCS sophomore, Sam Powell. “I’m glad I had the chance to be on the team with the seniors.  All of them have competed here before and I will miss them next year.”

In the double-elimination tournament, experience seemed to give the PCS Bobcat team an advantage as they slipped past Quitman in their first round, 24 to 15. In the next round, the third-seeded Northeast Jones Tigers beat the Panthers, 22 to 10, sending Petal to the loser’s bracket. Petal had a chance to 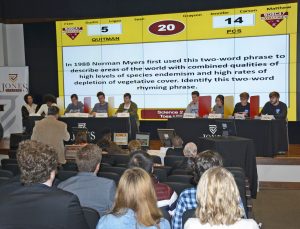 rest up before facing the fourth-seeded Sacred Heart Crusaders. By outscoring the Crusaders, 34 to 12, Petal earned the victory. Because Sacred Heart lost to Petal and the fifth-seeded Quitman team in the first round, The Crusaders were eliminated. With a loss to PCS, Quitman tried to regain the opportunity to play in the final championship round by taking the early lead in their match against the sixth-seeded Oak Grove team in the loser’s bracket. The Quitman Panthers challenged the Warriors early to capture the lead but not the win. Oak Grove’s Ethan Choi took control of the match and pulled the Warriors ahead, 24 to 19.

In the quarter-final round, the Oak Grove Warriors tried to dominant the Petal Panthers, but Petal’s Logan Baggett turned the tide by answering correctly and edged the Panthers ahead. A missed daily double by Petal offered a little hope for the Warriors with only three-points between the teams. Then, Petal’s Wyatt Carter and Thomas Sanchez beat Oak Grove to the buzzer and pushed the Panthers past the Warriors, 24 to 19, to seal their spot in the semifinals.

In the semi-final round, the Tigers of Northeast Jones fell flat facing the Panthers of Petal. Meanwhile, the Petal Panthers kept their winning momentum to shut out the Tigers, 19 to 0.

“Clawing our way back from the loser’s bracket up to the championship was definitely tough, as well as something we’re proud of,” said Petal Junior, Raburn Paris. “We have to come in next year stronger and with a more diverse knowledge base.”

Petal and Presbyterian Christian had not faced each other before coming into the championship final round. After playing two rounds prior to the championship round, Petal seemed to lose steam as they entered the second round of the best of three championship matches.  The Petal Panthers won the first round 33 to 24, but PCS turned up the heat with seniors, Matthew Rester, Carson Dorsey, Jennifer Jian and Grayson Nocera racking up the points. The Bobcats slaughtered the Panthers, 44 to 14.

The third and final round would ultimately decide who would be the 2019 Bobcat Math League Champion with PCS gaining momentum. Petal was only able to get a few points from PCS as the Bobcats ran away with the final match, 45 to 12. Individually, the Bobcats had three members of the All- 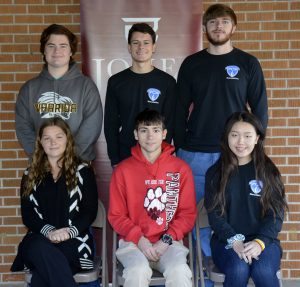 League Team with Grayson Nocera, Matthew Rester and Jennifer Jian, who also earned the Overall Most Outstanding Player. Jian received a laptop from Howard Industries for having the highest average of accurate answers during the regular season. Also, on the All-League Team were Petal’s Wyatt Carter, Northeast Jones’ Lexi Berlin and Oak Grove’s William Mitchell.

All of the teams, coaches and schools who participated in the playoffs received monetary awards depending upon their final placement in the playoffs. As first-place winners, Presbyterian Christian High School team members said they are excited about the monetary award and feel blessed to have talented team members and excellent faculty. However, this win was especially “bittersweet” for PCS Coach Brown.

“It has been an honor to work with such great students over the years. It is an amazing feeling to be the champions as I am retiring after this year. I am excited to see what our team will do in the future!” 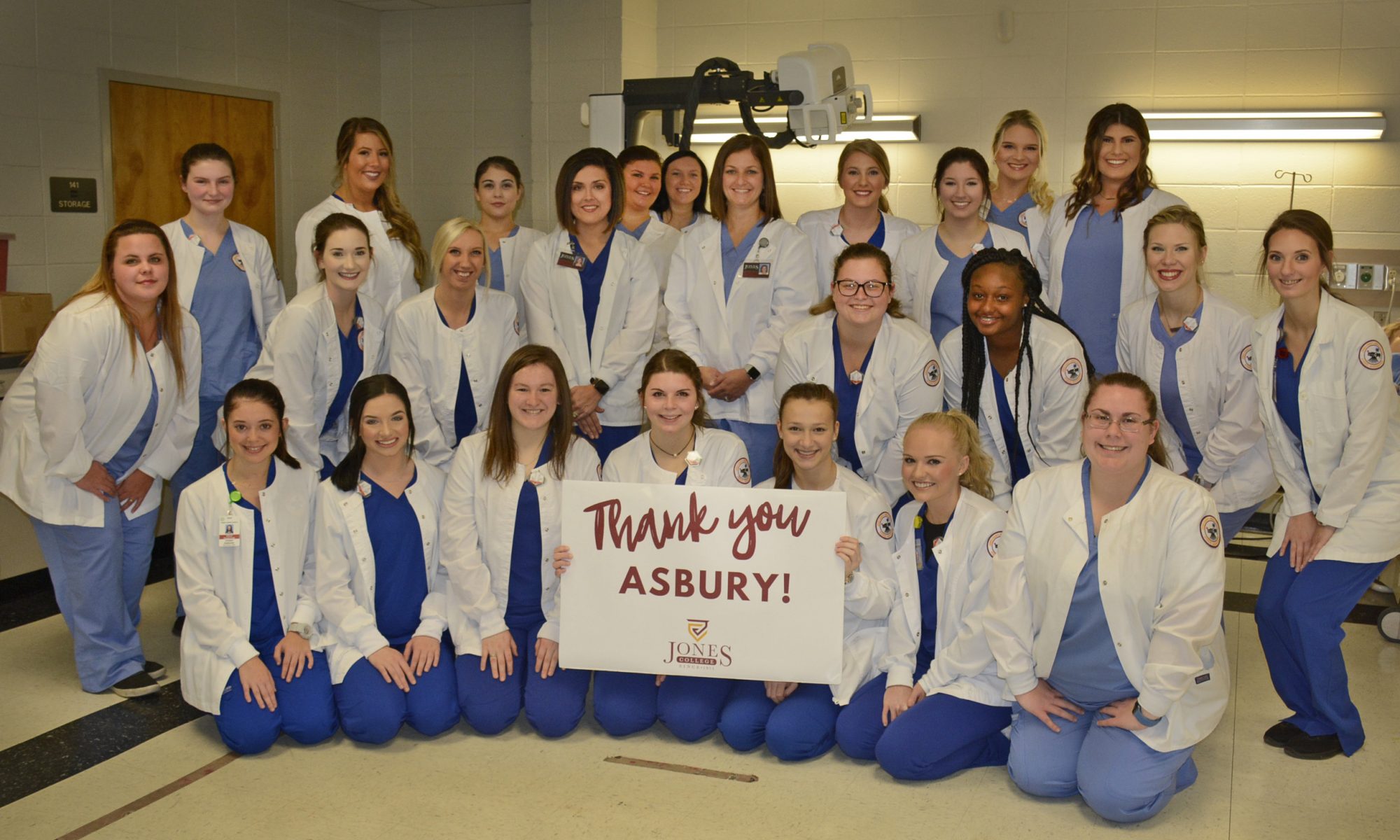 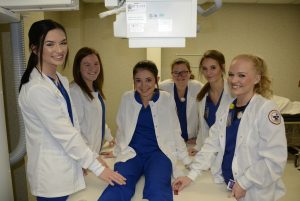 “Most health care facilities now utilize digital technology,” said Jones College’s Radiologic Technology Director, Mandy Pearson M.S. R. T. (R). “Without this donation from Asbury, we would not have the advanced technology to train our students on campus. This new equipment allows Jones students to be well-prepared to enter the clinical environment.”

Sophomore Jones College student, Sara Sadler from Columbus said she is excited to be a part of the change in the radiologic technology department at Jones. Sadler said she also benefitted from using the older equip 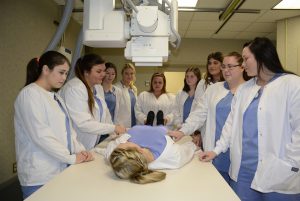 ment because some clinical sites don’t have the newest technology.

“Since technology is advancing and more clinical sites are becoming solely digital-based, it is great Jones has received new, top-of-the-line equipment which helps broaden my knowledge,” said Sadler.  “I strongly feel Jones is doing a great job at preparing me for my future in the workplace to be a radiologic technologist.”

Sadler points out having new equipment is a big plus. However, Jones’ radiologic technology program also has a high success rate and pass-rate for students taking the national registry upon completion of the program. Now, with the new digital equipment in the Jones lab, Pearson said Jones College students should have an advantage in th 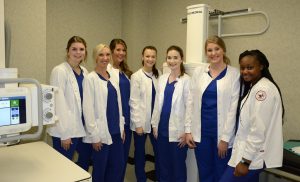 For more information about the Jones College Radiologic Technology program, email Mandy Pearson at mandy.pearson@jcjc.edu or call the department at 601-477-2416. 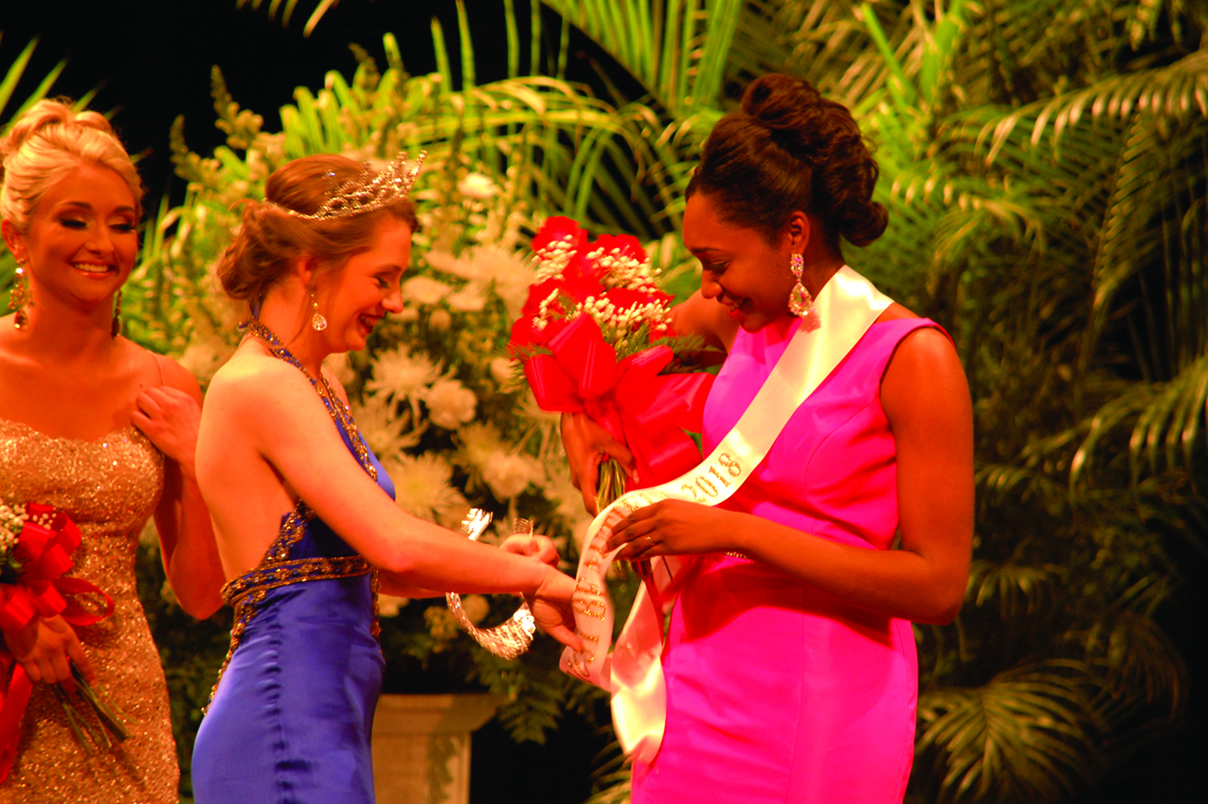 ELLISVILLE – Jones County Junior College will host its annual Most Beautiful Pageant on Thursday, November 14, at 7 p.m. in the M. P. Bush Fine Arts Auditorium. The pageant is sponsored by the JC yearbook staff and directed by Dr. Tessa Flowers. Twenty-four contestants will compete for the title of Most Beautiful.

Entertainment will be provided by Jones OnStage show choir members and Joe Mauldin on piano.