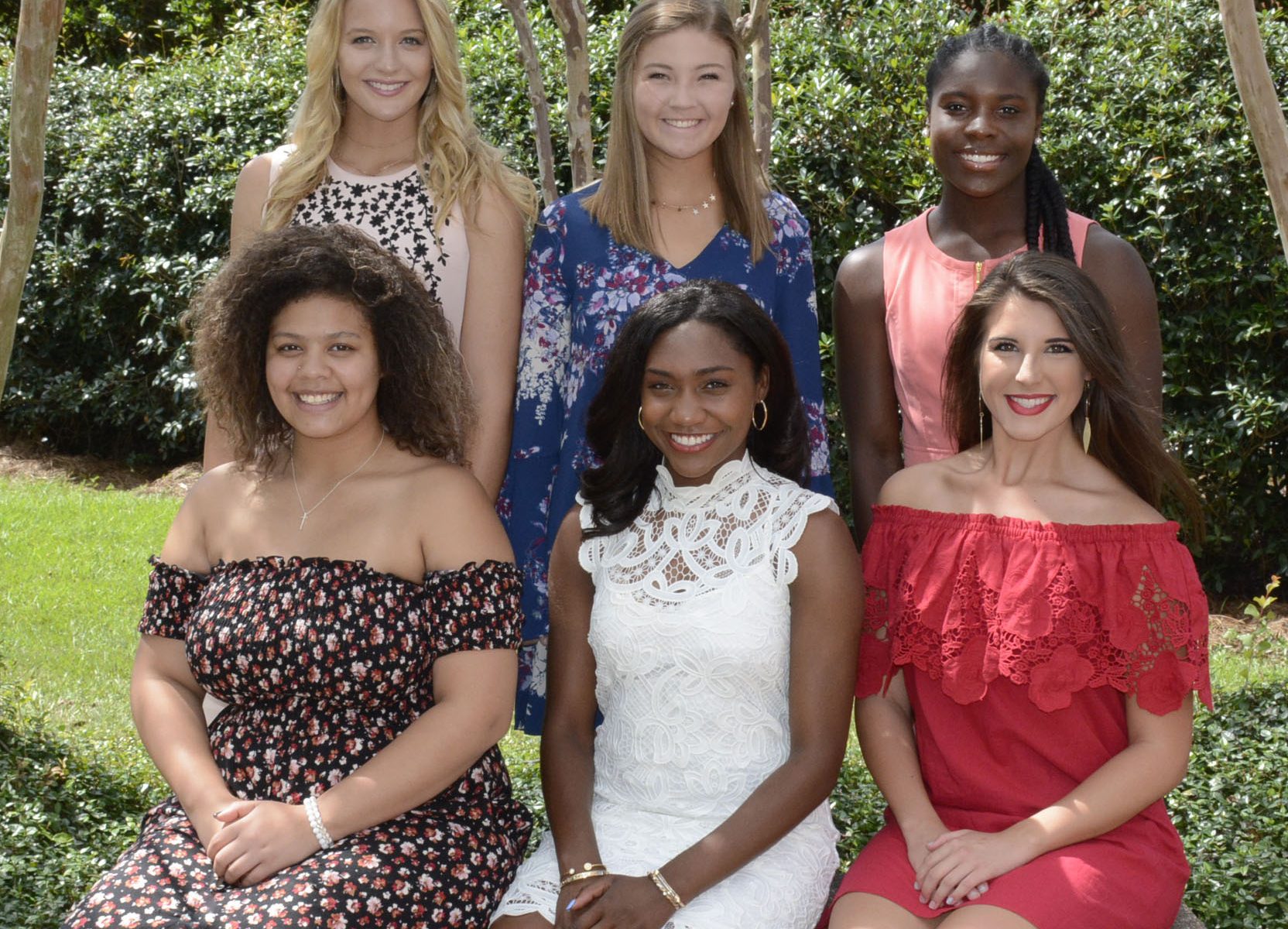 ELLISVILLE–Homecoming on the campus of Jones College in Ellisville is set for Saturday, October 20, with the theme, “Inspiring Bobcats through the Ages.”  Some special events and reunions are scheduled for Friday night, October 19.  Last month, JC students elected its 2018 Homecoming Court with the following ladies representing them during Homecoming festivities.

Queen: Haley Smith of Ellisville is majoring in biology with aspirations of becoming an orthodontist.  The Jones College sophomore is a member of the Bobcat Brigade, a student recruiting organization, and the Student Government Association. The South Jones High School graduate participated in the show choir and the Bravettes dance team. Her classmates elected her to Homecoming Queen, Most Beautiful and Miss Congeniality. She was also chosen to represent her hometown as Miss Hospitality of Ellisville. Smith graduated Magna Cum Laude from South Jones and she was honored to be in the South Jones High School Hall of Fame and a Mississippi Scholar. After completing her studies at Jones and William Carey University, Smith plans to further her education at the University of Mississippi Medical Center. Veonica and Undrell Covington are her parents.

Escorting Smith will be Avery Millsap of Ellisville. The civil engineering major is a member of the Student Government Association. The South Jones graduate intends to further his education at Mississippi State University and start a business. Millsap’s parents are Alluna Millsap and Maurice Pruitt.

Student Body Maid: Kaitlyn Craig is your Student Body Maid. The Petal resident is majoring in public relations. She is a member of the Jones College tennis team and a member of the 2018 State Championship team, Phi Theta Kappa Honor Society, Bobcat Brigade and the Lead Team Member of the Fellowship of Christian Athletes. At Petal High School, she was the captain of the tennis team and she was a member of the National Honor Society.  The Honors Graduate was also elected as a Petal High School Homecoming Maid. Craig’s aspirations include being a publicist for a major company after earning her public relations degree at the University of Southern Mississippi. Her parents are Rob Craig and Christy Guthrie.

Escorting Craig is Jon-Mikal “Hunter” Dykes.  He is a Petal resident majoring in nursing. At JC, Dykes is a member of the baseball team and the Fellowship of Christian Athletes.  In high school, he was the captain of the baseball team winning multiple Pitcher of the Year awards and MVP honors. Dykes’ future plans include pursuing a baseball career, earning his bachelor’s degree and working as a pediatric nurse in the same hospital where he received cancer treatments. His parents are Joey and Sheila McMurry and Terry and Lucy Dykes.

Sophomore Maid: Vicksburg native, Mikayla Banks is a pre-dentistry major. Her JC activities include being a member of the Lady Bobcat Soccer team and the Student Government Association. While at Vicksburg High School, Banks was a member of the soccer and track teams, Key Club, Mu Alpha Theta Math Honor Society and the National Honor Society.  Her future plans involve being accepted into Dental School and opening her own practice. Bank’s parents are Michael and Michelle Banks.

Banks’ escort is Rogers Wesley of Vicksburg.  The paramedicine major was active at Warren Central High School as a member of the Key Club, elected Vice President of the Student Council, and he earned the title of Mr. Warren Central High School.  Wesley hopes to become a registered nurse and paramedic after graduating from Jones.  His parents are Cedric Wesley and Beverly Taylor.

Sophomore Maid: Jessica Smith is a Seminary native majoring in nursing.  While in high school, she played softball and volleyball, earning 1st-Team All-District honors for all four years, and she was a Mississippi Scholar. Smith is proud to be a member of the Jones, 2018 NJCAA Softball National Championship team.  Her college plans include earning her Bachelors of Science in Nursing at the University of Mississippi Medical Center with the hope of becoming a nurse anesthetist. Greg and Jenny Smith are her parents.

Smith’s escort is Columbia resident, Charles Davis Thompson, who is an engineering major and is a student manager of the JC 2018 Softball National Championship team. The Columbia Academy graduate was a member of the football team and the 3A MAIS Baseball State Championship team.  He was elected as student body Vice President and graduated in the Top-10 of his class. Thompson’s future plans include graduating from the University of Mississippi with an engineering degree.  His parents are Chris and Andrea Thompson.

Freshman Maid: Kaitlyn Evans of Seminary is majoring in veterinary science.  At Seminary High School, Evans was selected by her classmates as the Wittiest and the student with the Most School Spirit.  Her Jones activities include being a member of the Agriculture Club.  Evans’ plans are to graduate from Mississippi State University with the goal of eventually being one of the top veterinarians in the state. Her parents are Robin and Corey Booth.

Escorting Evans is Javin Moore of Collins who is majoring in computer science. In high school, Moore played football and basketball for Seminary High School.  His future plans include graduating from Jones and eventually working at one of the leading software companies. Moore’s parents are Jerry Moore and Kenya Mead.

Freshman Maid:  Erin Perry of Petal is a psychology major at JC. The Petal High School graduate was a member of the Petal Show Choirs, Soundsations and Innovations. Perry graduated with honors and she was also involved with the Interact Club, Health Occupation Students of America and the National Honor Society. Her future plans include graduating from the University of Southern Mississippi with a master’s degree in child psychology. Robert and Ginger Perry are Erin’s parents.

Perry’s escort is Corey Davis of Petal. The general studies major graduated as a Mississippi Tech Master and Mississippi Scholar.  His future plans include graduating from the University of Southern Mississippi with a business administration degree. Rob and Becky Stephens are Corey’s parents.

The JCJC Homecoming court will also have represented as the flower girl, McClellan Cooley, the daughter of Jason and Joanna Cooley of Ellisville. The six-year-old is in first grade at South Jones Elementary School. Jonah Dunlap, the 2018 Homecoming Court crown bearer is a first grader at Oak Grove Primary School.  The six-year-old is the son of Joel and Jennifer Dunlap.  For details about Homecoming events and activities check out the News page on the Jones College website: http://www.jcjc.edu