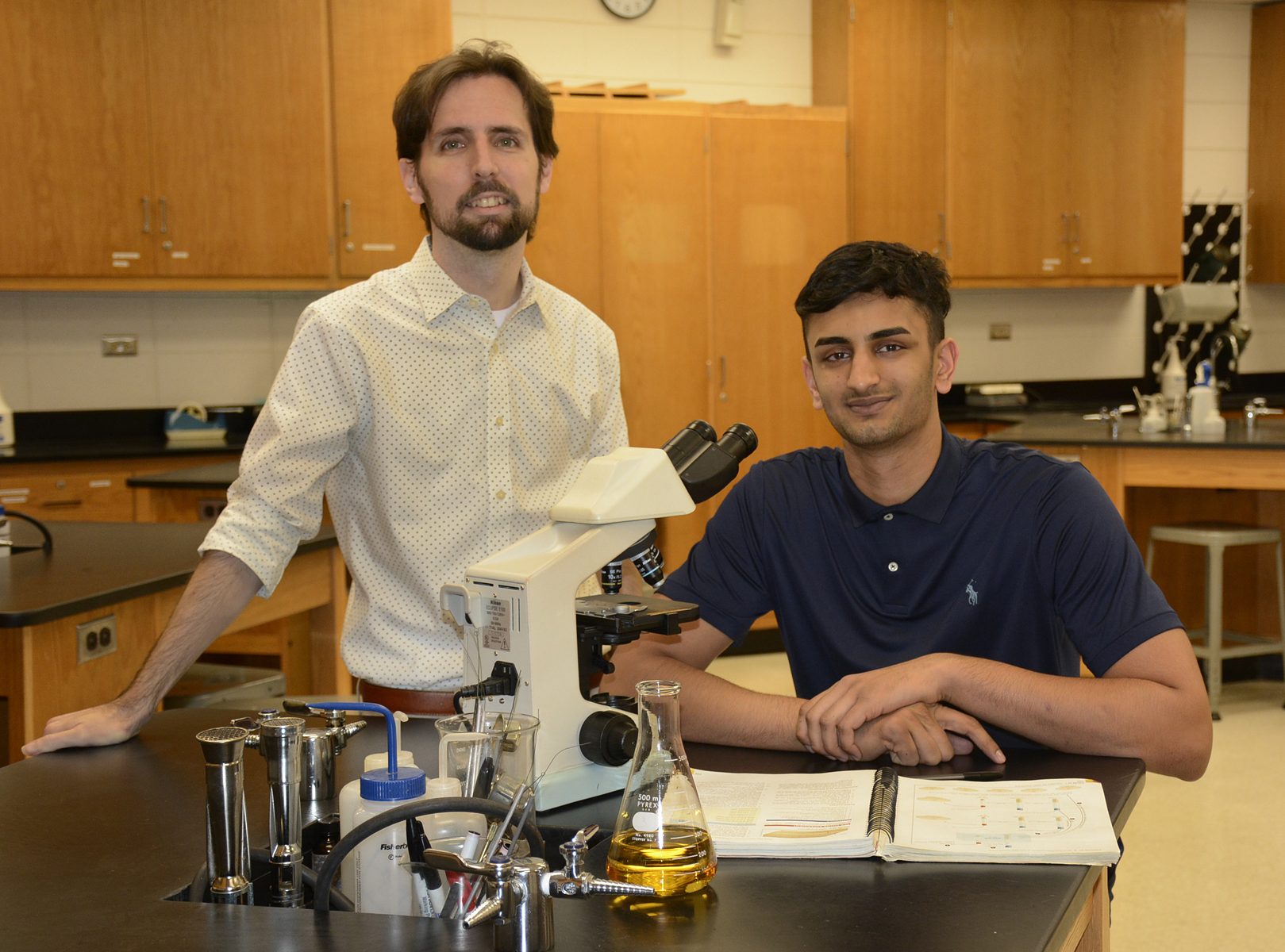 ELLISVILLE – Two highly motivated and hard-working men in the science field were selected to represent Jones College as the Higher Education Appreciation Day, Working for Academic Excellence representatives. Science instructor, Eric Shows of Ellisville and Jones College sophomore and pre-med/biology major from Hattiesburg, Shivum Desai were selected to represent the college in Jackson during a special day of recognition. They will join 70 outstanding students and faculty members from 34 Mississippi public and private universities and community colleges in Jackson to receive special recognition from the Mississippi Legislature in February, at the 32nd annual HEADWAE luncheon as a reward for their excellence in education.

“I am honored to represent the college and also my division, as we have had several high caliber science faculty and student honorees for the program during my time at Jones.  This year it is extra special because I get to share the honor with Shivum.  I have served as Shivum’s academic advisor and have seen him in action as a Phi Theta Kappa honor society officer, so the whole experience has an extra dimension of significance,” said Shows.

Additionally, this honor is also shared with Shows sister and mother. His sister, Natalie was the HEADWAE student representative with their mother Sandra, who retired from JC after teaching cosmetology for 29 years, represented the faculty HEADWAE representative in 2007.

“I’m sure this is probably a rarity to have family members chosen for this same honor but that also makes it extra special,” said Eric Shows. “I am humbled to be selected also knowing I was nominated by a faculty member and because I know I have the support of my colleagues and the college administration.”

Shows has been the Science Division Department Chair for the last five years and has been teaching freshmen honors biology and microbiology courses for the past nine years at Jones College. The South Jones High School graduate was a dual-enrolled student at Jones in 2000, before his senior year of high school, taking general physics I and II and college algebra.  He earned his bachelors of Science degree from Mississippi State University and his master’s degree in cell and developmental biology from Vanderbilt University. Shows has published several reports, abstracts and presentations with his colleagues including a report in Science magazine.

At Jones, Shows has been recognized as a finalist for the Faculty of the Year award in 2014, he was also selected to participate in the Mississippi Community College Leadership Academy, and he serves the college as the Mississippi Space Grant coordinator for Jones College, the co-principal investigator for the National Science Foundations’ Geo-SPARCC (Geosciences Streamlined Pipeline and Research for Community College’s Grant), he is the Advisement coordinator for the Science department and a PTK advisor.

“Eric is a valuable asset to the college. His student-centric focus embodies the very reasons why we are here. Whether it is in the classroom or an extracurricular activity, Eric is constantly challenging our students to be their best. He is an inspiration to us all!” said JC Dean of Academic Affairs, Jason Dedwylder, Ph.D.

Jones College student representative, Shivum Desai has aspirations of being a cardiologist. When the Oak Grove High School graduate is not working as the assistant manager at the Baskin Robbins in Hattiesburg, or in classes, Shivum is volunteering in Hattiesburg’s hospitals, while also maintaining a 4.0 GPA. During spring break he “job shadowed” at Forrest General Hospital and he routinely volunteers in the ICU at Merit Health Hospital. He is also the president of the International Honor Society, Phi Theta Kappa at Jones. Recently, Desai was also chosen as one of three Jones student recipients as a New Century Scholars/All-State Academic Team member through Phi Theta Kappa.

“Serving students and those in the community is an accomplishment for me.  But, if I can serve those that are in need, it then becomes an honor because of the impact it has on their lives,” said Desai.  “Being selected as the HEADWAE representative as a Jones student is a huge honor for me. I am thankful for those who believed in me and have been there to support my goals.  I hope I can inspire others to do great things and excel in their future endeavors.”

Dr. Dedwylder said Desai’s self-less attitude is a rarity among college students. Volunteering in the hospital has made Desai more aware of others’ needs. He enjoys spending time with these strangers in need, comforting them. I am very impressed because Desai is a full-time college student who works, volunteers and has a difficult and time-consuming field of study, yet freely gives of himself.

“Shivum is a remarkable student. There is no doubt he is committed to improving the quality of life of all around him. His journey to be a cardiologist will open doors for him to serve others and fulfill his purpose. He lives out our motto of ‘Inspiring Greatness’ every day,” said Dedwylder.

Desai’s future plans include graduating from Jones in May and earning his degree in biological sciences at the University of Mississippi, attend medical school and complete his residency in cardiology or internal medicine. His parents are Sanjay and Karuna Desai, who moved to Hattiesburg from London, England a couple of years ago.