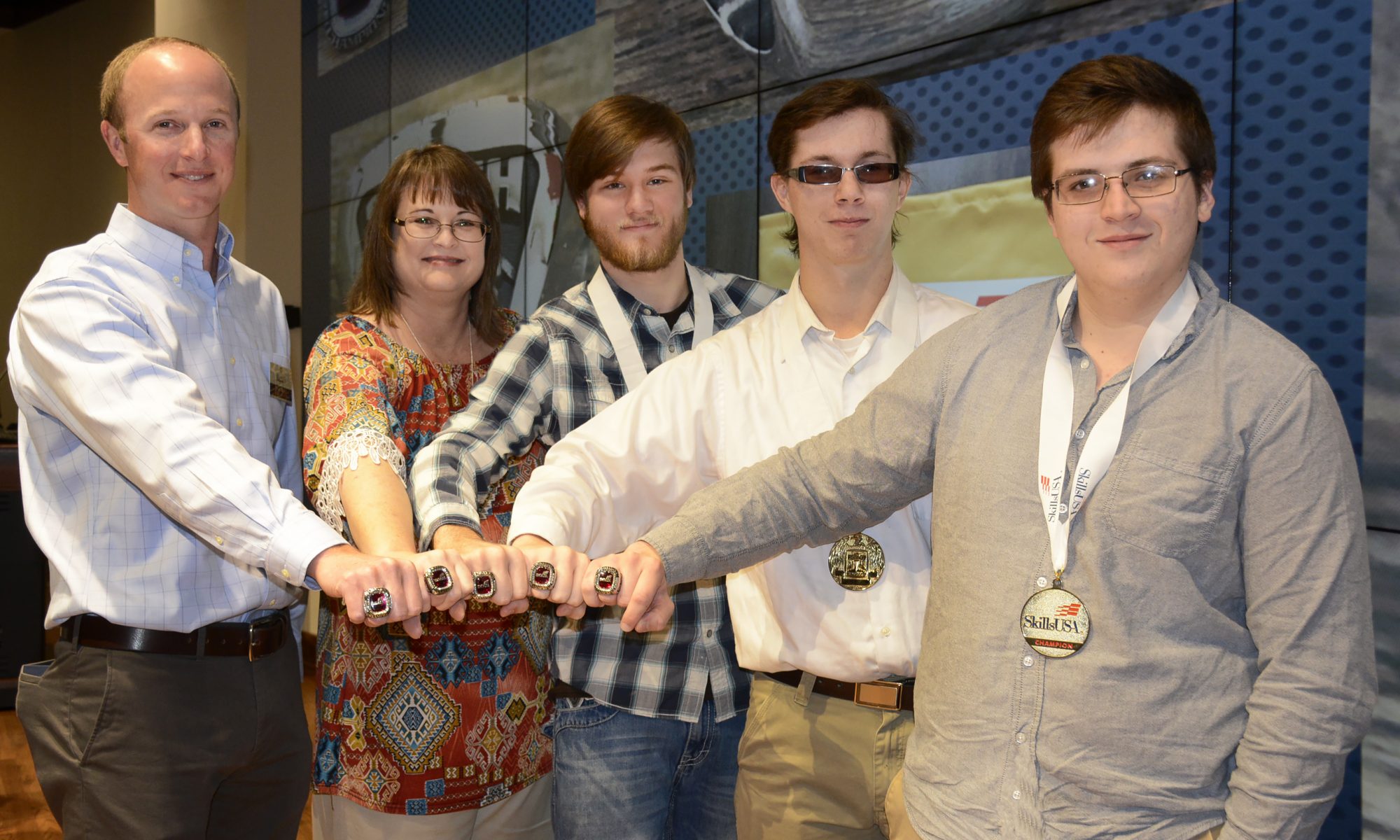 ELLISVILLE –SkillsUSA 2019 Gold Medalists and Jones College sophomores, Preston Hammonds of Leakesville, C.J. Hood of Ellisville and Lakelin Smith of Lucedale were honored for their accomplishments by Jones College, their SkillsUSA teammates, along with their organization’s competition technical advisors and Jones faculty, Ryan Hearn and Karen Kirk. Each of the team members and Hearn and Kirk received Championship Rings during the career and technical organization’s last meeting of the year. The three CAD-engineering technology students won first place at State competition in April 2018, and first place at the National competition in July 2019.

“Welcome to ‘Winnersville’ because that’s exactly where you’re at. Four gold medals came back to Mississippi from the SkillsUSA national competition and guess where three of them are? Right here at Jones College,” said JC Career and Technical Dean, Rod Tolbert. “I commend you for your dedication to your project and for your dedication to this organization”

Jones College’s 2018 team won the state competition the first year SkillsUSA added the Engineering Design and Technology category, and then placed seventh at Nationals. The 2019 team of Hammonds, Hood and Smith also won first place at the State competition and Nationals with the “Standi-Strap.”  Made from a 3-D printer, the Standi-Strap is a guitar stand and strap. Confident in their product, the student engineers and musicians said they were also confident in their presentation. However, their competitors from Georgia, Louisiana, North Carolina, Tennessee, and Texas, had difficulty grasping a team from Mississippi could defeat them.

“Not only did these students have a great design, but it was also a project they actually believed in. I think that’s why they won first place,” said Ryan Hearn, a JC SkillsUSA advisor and JC civil engineering technology instructor. “Any questions about their project were answered with certainty.”

C.J. Hood said when the team won in Louisville, Kentucky, the college received medals and a banner. Receiving his own banner and championship ring at the meeting amongst friends and family, meant a lot to him.

“This was really cool to receive the rings and banner. It means a lot to the college and it means a lot to me,” said Hood. “I dedicated a big chunk of my life into this project and to win was great. It was also a lot of fun.”

The three students and their advisors proudly showed off the Championship rings and the SkillsUSA 1st place banners they received as friends and family congratulated them for their accomplishment.

“Having my family here means more to me than the ring, but the ring is still pretty cool!” said Preston Hammonds.

As for next year, Hammonds will not be participating in SkillsUSA. He was accepted in the Disney College Program and will be taking classes online while working in Orlando. Part of the appeal, Hammonds said is the opportunity to work with Disney’s Imagineers.

“It’s an amazing opportunity getting accepted since I want to be an Imagineer. Nothing will look better than working at Disney and getting to work with the Imagineers for a week,” said Hammonds.

Despite the replacing a member of the team, Lakelin Smith said he and C.J. are already working on ideas to submit for the 2020 SkillsUSA competition. Their project will be different from the Standi-Strap, which they said has been improved upon and will go into mass production next year.

“It doesn’t make me nervous to have to come up with a new idea with somebody new. We are looking for someone we can work with in the same major. We have some ideas and we appreciate the support everyone has given us,” said Smith.

The State SkillsUSA Competition in Jackson is April 14 and 15. Only the first-place winners will continue to compete in Louisville, Kentucky at the National SkillsUSA competition, June 22-26, 2020. Hood and Smith said they hope they can continue the winning streak.