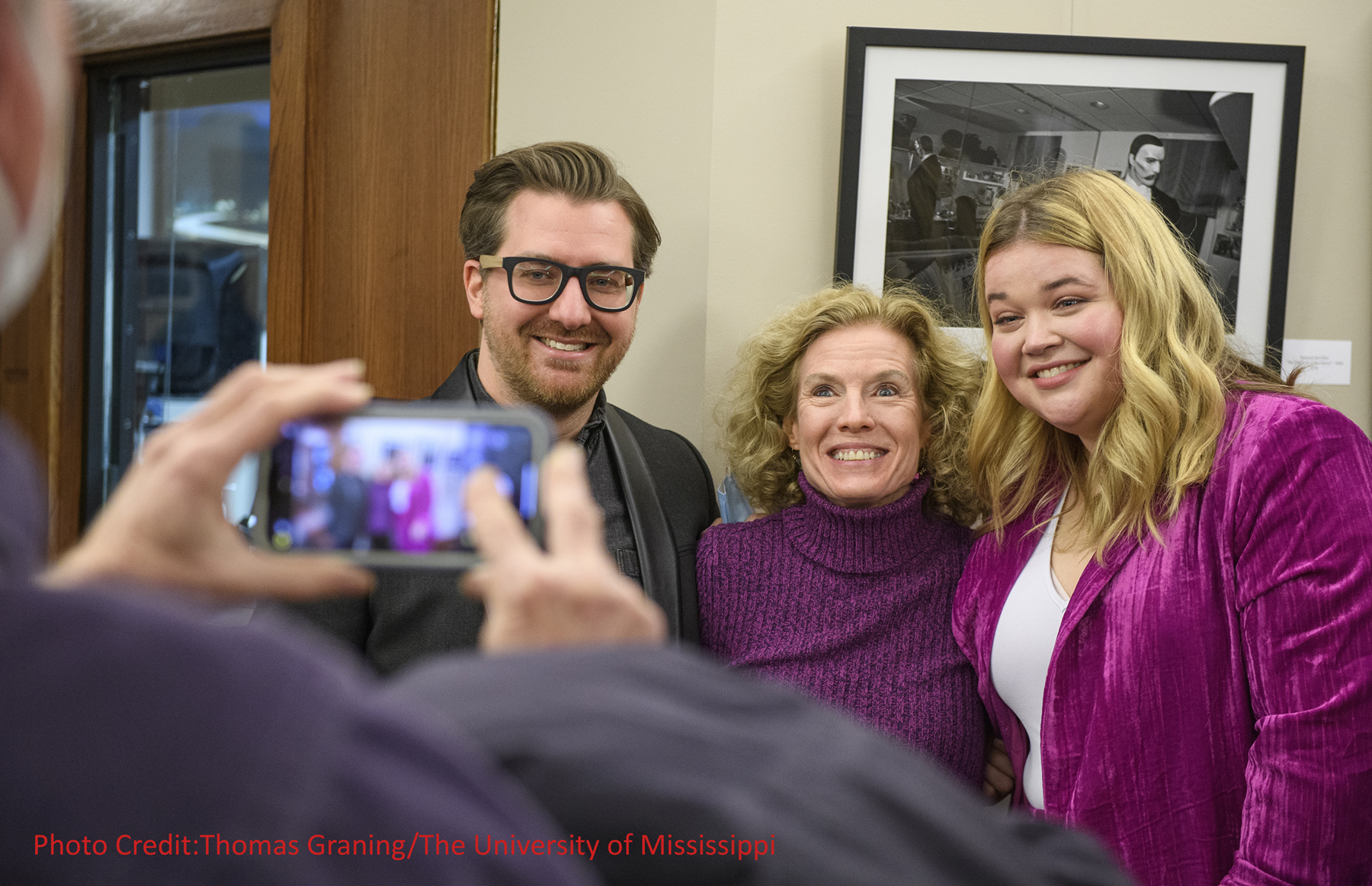 ELLISVILLE- From Brooklyn, Mississippi to just outside of Brooklyn, New York, Jones County Junior College 2004 alumna, Jenny Anderson’s journey to success has been spent capturing the intimate, candid moments of the stars. The University of Mississippi Journalism graduate was back in Mississippi recently for a reception in her honor to celebrate her first solo exhibit, “The In Between: Intimate & Candid Moments of Broadway’s Stars.” This exhibit gives the public a behind-the-scenes look of Broadway theater from the collection of more than 14 years of Anderson’s photos. Open to the public through the spring semester in the University of Mississippi’s Ford Center Gallery in Oxford, the exhibit captures Broadway stars on the red carpet and in numerous theaters in New York.

“It’s been a very overwhelming weekend!” Anderson admitted.  “Ole Miss asked me to do the show a couple of years ago, but Covid postponed the show until now. It has been great to have it all come together.”

The 37-year old’s journey from living her dream of working in the “Big Apple”  began before she was a freshman at Forrest County Agricultural High School. However, receiving a camera at 14 years of age was the catalyst to making her dream come true. Taking photos of life in the rural south, first as a hobby, with her grandaddy in the fields and her Mimi on the porch, to her daddy playing bluegrass music and mom on stage, gave her the confidence to pursue photography while in college.

However, it was her musical talent on the saxophone that landed the pre-med major a full-tuition marching band scholarship. She said band became her priority because it paid for tuition, and it was the only way she knew how to get a college education.

“With my mother, (Debra) teaching theater and performing in Wiggins and my dad (Doug) teaching art at FCAHS, I didn’t think we could afford college,” said Anderson. “At Jones, I started doing yearbook and newspaper and I got distracted from the original, practical goal! I really loved it! I was in the acting ensemble for the musical, Grease, and my good friend and drum major, Sarah Burkett played Rizzo. I was spread pretty thin doing a little bit of everything at Jones.”

On staff for the college newspaper, the Radionian, Jenny began writing stories and taking some photos. She fondly remembers doing a faculty profile story on Australian-born, science instructor, Fiona Qualls. Anderson said that’s when her “dramatic flair” came through. Qualls thought she sounded way more romantic than her real life.

Even though she enjoyed being a photojournalist at Jones, Anderson credits Ole Miss for allowing her photographic talent to blossom. She was the photo editor of the University’s newspaper, The Daily Mississippian at the same time, Erin Napier, of HomeTown fame and JC graduate was the Ole Miss yearbook editor.

“We worked together in the media center at Ole Miss. Erin used one of my pictures on the front spread of the yearbook. It was of my friend, Haley Strode (a current actress in LA) in the University’s play, A Streetcar Named Desire.  I knew it was an awesome photo but so did Erin. She created the most beautiful, and one of the most unique yearbooks ever designed at Ole Miss. It was gorgeous! It was all because of her designer eye.”

Soon after graduating in 2006, the then Water Valley resident applied for jobs everywhere-LA, NYC, Chicago, Nashville, and Atlanta. Getting to New York, she said was a little bit of luck while trying to be practical.

“I’ve had a romantic notion of being in NYC since I was younger. My dad blames my love of NYC on the TV show, Friends, which is probably true,” shared Anderson. “However, I wanted to move where I had a job offer. The ONLY job offer I got was in NYC as a souvenir photographer for Circle Line Cruises in Manhattan if I could get there in two weeks. I sold everything, including my car and got a one-way ticket that cost about $94, and I packed two suitcases. I probably had about $750 in my bank account and moved to NYC for that job. It’s insane to think about now, but I did it!”

Her full-time job at Circle Line got her to NYC but it wasn’t her goal. It took her two weeks to find the job that would establish her photography career; a paid internship at Broadway.com.

“I was very persistent. I didn’t hear anything for three weeks after I applied so I emailed and called every day because I knew this job was meant for me. I learned later that the photo editor was on vacation. He came back to some very strong, annoying emails from this 22-year-old southern girl desperate for this job,” said Anderson. 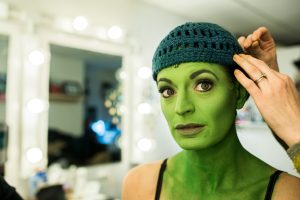 The job that only paid $6.50 an hour for 13 hours a week, launched her career. After six months, she was promoted to full-time after the photo editor quit. She didn’t get the title or pay raise, but she did everything expected in that role.

Her first assignment with Broadway.com was a dream for the Wicked fan. The Saturday, 8 p.m. assignment to shoot “Wicked Day” in 2007, conflicted with her job at Circle Line. After her boss wouldn’t give her the time off, she quit her full-time, safe job.

“I didn’t come to NYC to stand in a boat to take pictures of tourists. I came here to be a photographer…. It worked out by taking another waitress/hostess job at another restaurant. So, I had two different restaurant jobs plus the photographer internship at Broadway.com, in which I did all three jobs for 1 ½ years. It was crazy!”

After two years as a “photo editor,” Anderson finally got a pay raise and the title and quit the restaurant jobs. While at Broadway.com, she began shooting her favorite type of pictures, behind-the-scenes of Broadway plays; something that had never been done before. She worked 9 a.m. until 6 p.m. every day as the photo editor. Then, Anderson would take pictures at night and on weekends. Meeting publicists, actors, actresses and producers, established her as a Broadway photographer. Six years later, she quit to become a freelance photographer and she hasn’t stopped working. She mostly shoots editorial portraits of actors/actresses and promotional pieces, in addition to being hired by individual theaters as the “house” photographer.

“My favorite story involves shooting pictures of Glenn Close when the 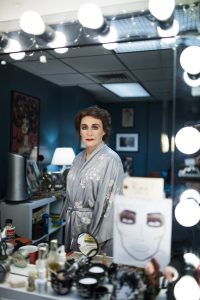 Broadway show, Sunset Boulevard was revised. She won the Tony Award for her role 20 years ago and they brought her back for the revival of the show. I was backstage taking pictures when she told me she was ready for her pictures in her dressing room, after she was fully dressed and in character. It was thrilling and amazing to be in that space with her! After a few pictures, she left and went to another location. I heard Glenn Close yelling from the wings upstairs, ‘photographer, photographer!’ I will never forget her yelling ‘photographer,’ for me!”

Known as the “sweet and kind one”, Anderson’s work behind-the-scenes opened the doors for her to be one of the main photographers for the Tony Awards every year. While taking pictures in 2018, she captured Taylor Louderman on the red carpet in the rain, with Radio City Musical Hall in the background. The 2018 Tony Award nominee for Mean Girls, not only posted Anderson’s picture on her social media, but Louderman’s dressmaker, Christian Siriano also used the picture on her website. 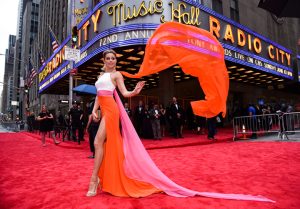 “I was standing in the rain, while the other photographers were under a tent. I thought it would be a pretty picture with Radio City Music Hall in the background. I know Taylor pretty well and she trusted me enough to walk in the middle of the rain. She just threw her dress up and the wind picked it up. It was magic!”

When the Covid pandemic closed Broadway, the “magic” ended in one area of Anderson’s life for almost two years. Fortunately, she was also employed by ABC News and covered news events, like the Presidential election and the Inauguration. She said she liked being able to use her journalism skills once again.

Then, when the pandemic shut everything down, Anderson retreated to Water Valley, Mississippi for three months. Becoming restless at home with her parents, she bought a car and traveled throughout the southeast taking “Porch Portraits.” 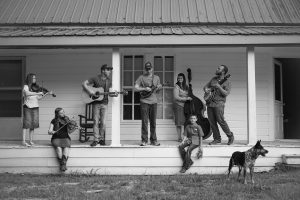 “Taking photos of the south, that’s the beginning of my love of photography. I hope to be able to continue to do more of that now, that I have more mobility,” said Anderson. “I credit being from a small-town community and being southern as a big reason why I am successful. I went to NYC with this hopeful, bright outlook on the world, theater, art, everything, and that got me into a lot of places I am now. I am lucky that I have a career that flourished, and hopefully continues to.” 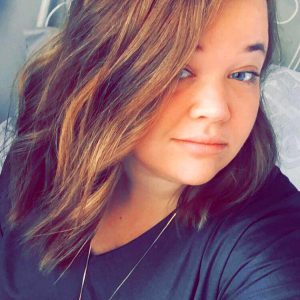 Becoming a freelance photographer seven years ago was a little scary Anderson said. However, she still has her days and nights filled doing a variety of work. Her photos have been featured in Vanity Fair, InStyle, The Wall Street Journal, The X Magazine, The Observer, Time Out New York, PureWow, People, USWeekly, EW, and Broadway Style Guide. Employed as a freelancer, she has also worked for Disney Television, Getty Images and The New York Times.

After spending the January 28th weekend in Oxford for the opening of her exhibit, Anderson drove back to New York the following Monday, to take photos of the Tuesday, opening night of the musical, “MJ”- the newest Broadway show about Michael Jackson. To see her work click on the website link, http://jennyandersonphoto.com/