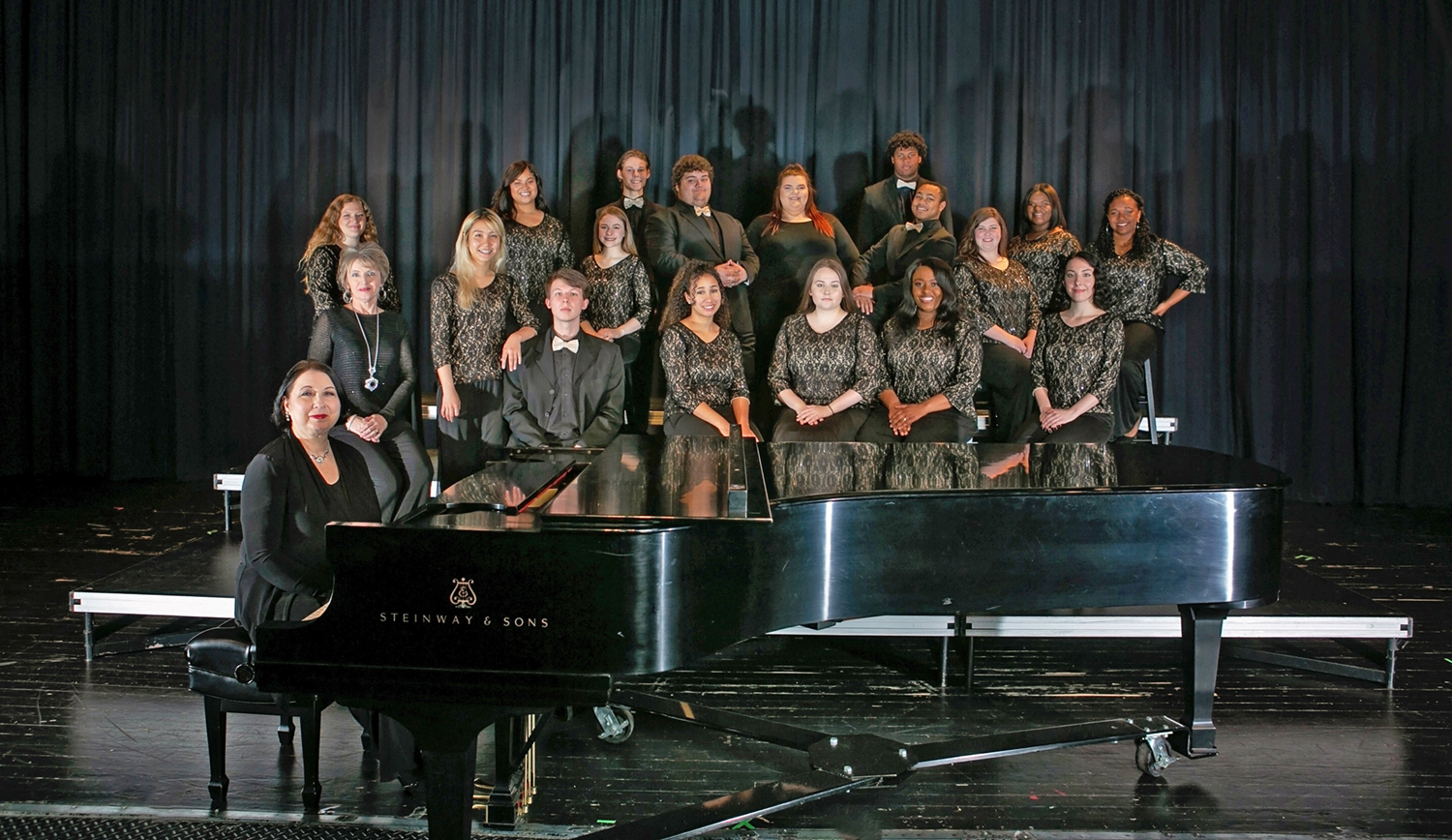 ELLISVILLE – The Jones College select chamber choir, JC Voices will present its annual spring concert, Invictus at 7 p.m. on Tuesday, March 30, 2021, at First-Trinity Presbyterian Church in Laurel. After a year of enduring the restrictions and challenges brought on by COVID-19, from performing in empty concert halls when possible, to rehearsing through masks and face shields with reduced personnel due to quarantines, JC Voices will be performing a concert reflecting and honoring the unconquerable human spirit. The public is invited to attend this free event.

Conducted by Dr. Susan A. Smith, accompanied by Dr. Theresa Sanchez, and assisted by Mr. Gregory Wascoe, the theme of the concert, Invictus is based on a poem by Ernest Henley about the Latin term which translates to “invincible,” or “unconquerable,” which has been the motto of the ensemble this year.

“Regarding the poetry of Ernest Henley, and specifically, Invictus, Arthur Symons, a noted 19th-century poetry critic wrote, ‘Mr. Henley of all the poets of the day is the most strenuously certain that life is worth living, the most eagerly defiant of fate, [and] the mos’t heroically content with death.’ As expressed in the last lines of the poem by Henley, set for chorus by Joshua Rist, ‘I am the master of my fate: I am the captain of my soul.’  While the group has experienced many challenges this year, from school closures, COVID-19 diagnoses, quarantined members, family deaths, virtual and limited rehearsals with strict guidelines, and the uncertainty of when, or if, they would be able to perform live again, they have prepared an uplifting program of joy, faith, hope, and perseverance,” said Smith.

In addition to Invictus, accompanied by USM cellist, Alvaro Miranda, the chamber choir will sing comforting songs of “home going,” and “death” by Johann Sebastian Bach/Rhonda Sandberg and Stephen Paulus as well as uplifting selections from Paul Basler’s, Songs of Faith, accompanied by USM horn player, Robert Brandon. A variety of 20th-century pieces, from the French folk song J’entends le moulin to the contemporary favorite Light of Clear Blue Morning, sung by the JC Voices women, and the Scottish folk song, Parting Glass, sung by the JC Voices men, will warm your heart and give you hope during this time of uncertainty and isolation.  The Awakening, composed by Joseph Martin, concludes the concert with reflections of sadness, hope, celebration, and remembrance.

“Martin tragically lost his middle school choral teacher and his musical inspiration to a very violent death after a choral concert. This piece is written in honor of her and is composed in three sections, as described by Martin—the first a dream, or rather nightmare, where there is silence and despair, the second, a new day of hope and the end of silence, and the finale, a hymn of praise to the ‘Giver of Song.’ The final words of The Awakening, ‘Let Music Live,’ reflects the sentiment of musicians around the globe this year,” said Smith.

JC Voices dedicates the program tonight to all those who love, participate in, and support music.  Smith said she hopes the audience will never take it for granted and may we, like Ernest Henley, strive to be “unconquerable,” and “invincible.” For more information about how to support JC Voices or to be notified of our upcoming concerts and events, contact Dr. Susan A. Smith by email at, susan.smith@jcjc.edu. For more information about the Jones College Fine Arts Division call, 601-477-4203.