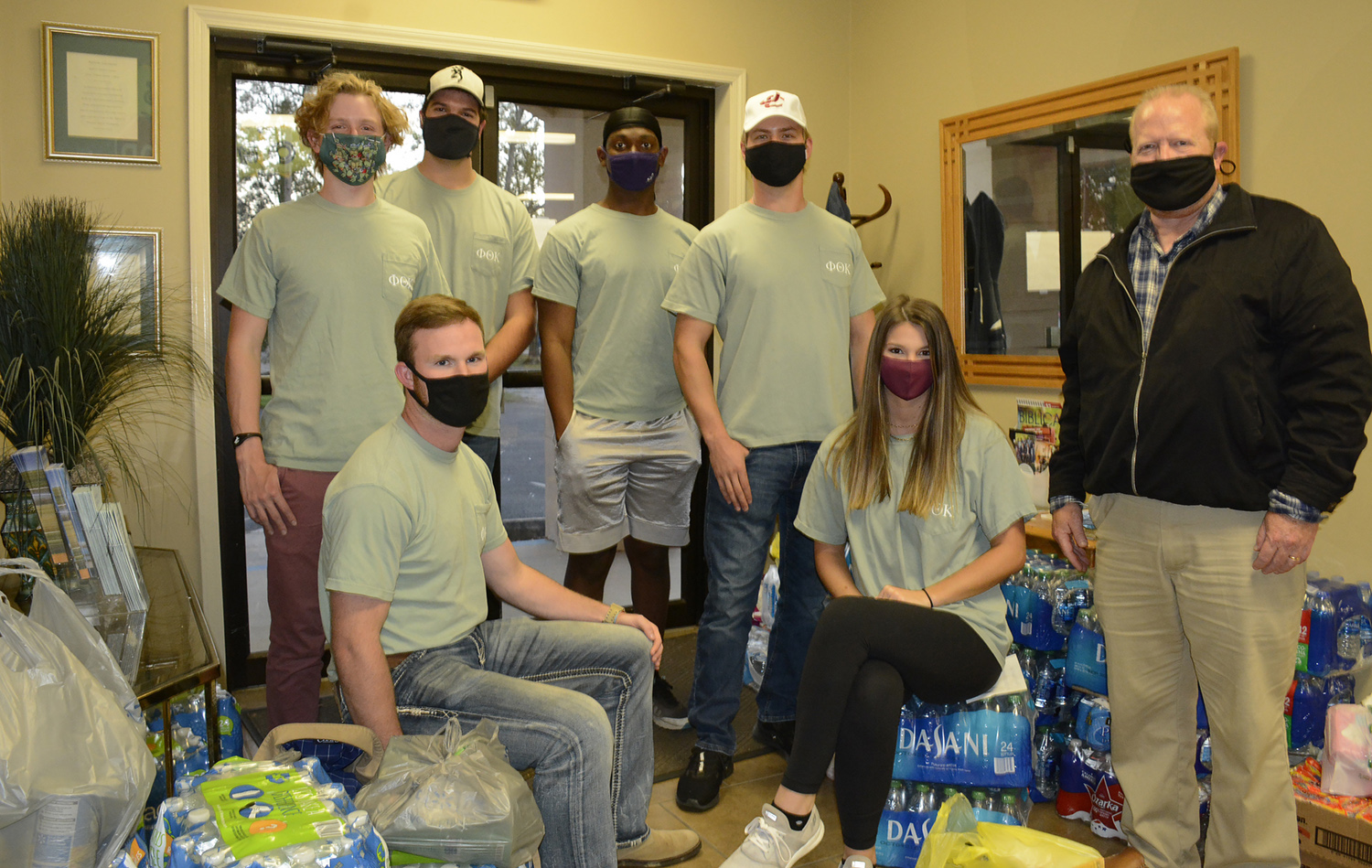 ELLISVILLE – Each year, the Rho Sigma chapter of Jones College’s Phi Theta Kappa International Honor Society takes on a project to assist the college’s administration, as well as the campus and the surrounding community. The College Project group of PTK students, McKay Lee Bray of Leakesville; Matthew Harrison of Laurel, Caleb Harris of Jackson, Garrett Bradshaw of Raleigh and Isaac Burns of Lucedale, led by Curtis Boleware of Seminary, quickly discovered the needs were many with the arrival of the COVID-19 virus.

“After talking with JC faculty and administrators who helped us pinpoint what would have the best impact for the most people, we first focused on the college’s pantry program which helps our students who need food or personal hygiene items. However, when the campus and community responded to our request for items, we were overwhelmed!” said PTK College Project Director, Curtis Boleware.

Some of the contributions from the community began pouring in after Bobcat Pantry Coordinator, Kristen Register spoke to the Ellis Club. The club’s contribution of $500 in food and other items, along with individual donations from JC’s campus grounds crew, allowed PTK to purchase 167 cases of water and other needed items. Colonel Mark Prine, from Camp Shelby, donated 100 cases of drinks and enlisted a platoon from the Youth ChalleNGe program to disseminate the drinks. Additionally, the JC truck driving program’s students volunteered to pick up donations, and the JC horticultural department delivered some donations. Thankfully, the Baptist Student Union has provided the much-needed storage space for donations to help with future needs.

“The JC Bobcat Pantry thanked us throughout the entire process for packing the pantry. They emphasized the impact we were making would be helping students who live in their cars and the others who need a little help,” said Boleware. “We had no idea so many people were dealing with hunger on campus.”

Once the need on campus was met, the PTK students sought the help of the Beta Clubs in all of the South Jones schools to fill each of their pantries. The JC students discovered the protocols implemented to limit the spread of the virus at the elementary, middle and high schools included cutting off water fountains and closing the cafeteria. About 2,600 students from three public schools, Moselle Elementary, South Jones Elementary and South Jones Middle and High School benefited from the donations.

“The public schools in the area were astonished to receive the large amount of donations we had gathered,” said Boleware. “Our PTK members really enjoyed giving back to the community and volunteering at the drop-off booths at the Baptist Student Union and in the football stadium parking lot.”

PTK Advisor, Mark Brown said he is especially proud of this group of students and their determination to succeed. As they overcame each challenge, they were blessed by their efforts of those who donated.

“This group had to overcome the fact there were a lot fewer students on campus and they had to physically distance themselves and follow the sanitizing protocols. Unfortunately, the student director of the College Project, Curtis Boleware came down with the COVID-19 virus, but he still managed to take care of business.”

While preparing for the Pantry Drive, JC students said they didn’t realize the enormity of the problem. However, the impact the drive has made on so many people has been astounding. Surprising the PTK College Project members the most were the reactions from the students and school officials. In fact, one JC PTK member, Lane Douglas of Pearl, was so moved by the whole experience that he donated an entire pallet of water, or 84 cases, to the College Project’s Pantry Drive.

“I have firsthand proof that one person really can make a difference, not by his own hands but by connecting those that need help with those that want to help. Leading this project has helped me grow in several aspects. I look forward to continuing our work next semester!” said Boleware.

Phi Theta Kappa’s College Project team plans to expand their efforts in the spring semester by involving local churches and businesses to ensure that the project continues to grow until the needs in the community are met. Donations of toiletries, canned foods, non-perishable foods like Ramen Noodles, grits and water will be accepted shortly after the spring semester begins and students return to campus, February 1, 2021.