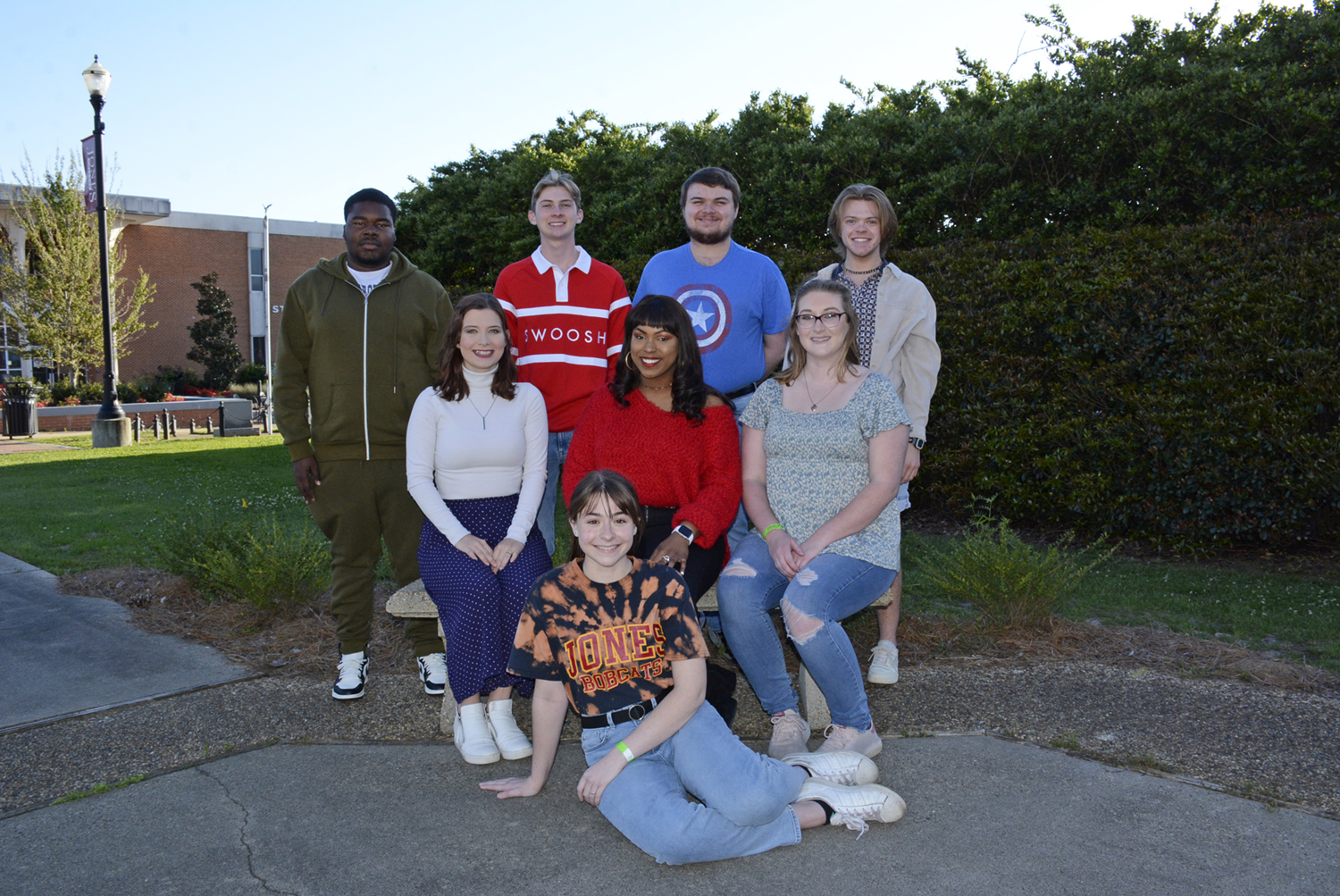 *Live performances on the Ellisville campus will be on Friday, April 30, and Saturday, May 1, at 7:30 p.m., and Sunday, May 2, at 2:30 p.m. at the M. P. Bush Fine Arts Auditorium. All guests will be required to take the health screening, physical distance from other guests and wear masks. To live stream the musical theater production the cost is $10 per person or $25 per family watching together. The link to live stream is https://www.showtix4u.com/event-details/50954

ELLISVILLE- Live and virtual performances of Jones College’s theatre production, Godspell should allow more people to enjoy theater, safely. After canceling last year’s production of Mamma Mia! because of Covid-19, this spring, the JC Theatre Department is excited to have eight Jones College students performing for a variety of audiences.

Led by Jones College’s Theatre instructor, Dr. Jennifer Bruton, JC students, Peyton Griffin of Ellisville (Jesus), Conner Smith of Ellisville (John the Baptist/Judas), Kambri Pippin of Laurel (Uzo), Erin Biglane of Ellisville (Anna Maria), Jalen Poindexter of Jackson (Telly), Peyton King of Sumrall (Lindsay), Kyra Lampley of Petal (Morgan), and Isaiah Smith of Laurel (George) will perform the 1971 Broadway hit show, Godspell. The popular, rock musical based on the Gospel of Matthew, is the first musical theatre production from composer, Stephen Schwartz who went on to write Wicked, Pippin and Children of Eden. John Michael Tebelek wrote the play as a student at Carnegie-Mellon, which originally cast a troupe of clowns who join up with Jesus Christ teaching various lessons through song and dance. Bruton said the show is deeply rooted in community and inclusiveness which is an important message she wanted to share.

“I felt very strongly that given the events of the past year and the role of theatre in creating a home for students who find common ground with their fellow actors, this was the show for us. It calls for an intimate cast of only 10 and with so many of our students enrolled online this year, we actually only have eight cast members,” said Bruton. “Regardless of your religious stance, everyone can relate to the characters in the Prodigal Son parable, or be inspired by the passage, ‘You are the Light of the World,’ because we all need light, we all need each other and that’s what this show is about.”

JC sophomore Peyton Griffin, starred in numerous musicals and show choir performances at South Jones High School, along with JC freshman, Conner Smith. They are eager to perform together once again but for the first time at Jones College. Playing Jesus’ biggest supporter before portraying the traitor who betrays Jesus, Smith said he likes the challenge of portraying these contrasting characters. Equally excited to portray the larger-than-life lead role of Jesus, Griffin said he welcomed the opportunity especially after the cancellation of last year’s musical, Mamma Mia!

“I had never heard of this show before and thought it would be fun to be a part of something unfamiliar,” said Griffin. “I really wanted the role of Jesus because I knew it would challenge me in many ways.”

Also a veteran of song and stage since elementary school, music major, Erin Biglane said she not only enjoys playing the “kind-hearted” Anna Maria, but she also loves how the writers of Godspell recreated the New Testament’s parables. The lively music she said, really compliments the idea of this musical being a modern take on the Gospel.

“The writers did an excellent job of conveying the Gospel with a modern twist. This is very apparent with the well-known song, ‘Day by Day’ my character sings after she decides to follow Jesus,” said Biglane.

Thrilled to be performing again is Kyra Lampley who sees this as her last production. The sophomore, who is involved in four choral groups on campus and is on staff for the student newspaper, The Radionian, Lampley will be focusing on her major, broadcast communications next year.

“I wanted to be a part of this production because it’s most likely my last chance to live out my childhood dreams of becoming a Broadway actress,” said Lampley. “After canceling the show last year, right before opening night, I am going to leave everything on the stage; I am going to give this my all and enjoy every moment!”

Freshman, Isaiah Smith is new to the Jones College stage but with lots of theatrical experience. His last live role was as Pharoah in the play, Joseph, and the Amazing Technicolor Dreamcoat at Laurel Christian School. Playing George, the comedian has been a little more enjoyable he admits.

“I like George because of his nature as the screwball comedian of the group.  His song, ‘Light of the World’ is one of the highlights of the musical that I’m excited to be a part of,” said Smith.

To help ensure the show “goes on,” the Theatre department has collaborated with several departments on the Jones College campus. Students in the Music Industry program are assisting with sound and lighting for the show and JC art instructor, Melanie Eubanks has contributed her art to the opening scene. Commercial and residential maintenance instructor, Josh Ishee and his students have assisted with set construction and Jones graduate, A.J. Robinson is serving as a production assistant and rehearsal pianist.

Performances of Godspell at Jones College are Friday, April 30, and Saturday, May 1, at 7:30 p.m. and on Sunday, May 2, at 2:30 p.m. Jones College faculty, staff and students, will be admitted to the live performance on the Student Center Plaza free of charge with a valid Jones ID. CDC Covid-19 protocols, including wearing masks and social distancing will be required.

The public is invited to the virtual performance with the purchase of a ticket for $10 per person. A link to the virtual performance can be found at,  https://www.showtix4u.com/event-details/50954 or on the Facebook page, Jones College Musical Theatre  https://www.facebook.com/JCJCMusicalTheatre. For more information, please contact JC Theater Director, Dr. Jennifer Bruton at 601-477-2675 or at, jennifer.bruton@jcjc.edu.